"Just accept the Order. They are there. You can't avoid them."
―Rudjek[src]

Rudjek (c. 81 BCE – 48 BCE), also known as The Heron, was the nomarch of Saqqara Nome and a member of the Order of the Ancients during the reign of Pharaoh Ptolemy XIII.

In his quest to access the Isu vault in Siwa, Rudjek became one of the five in the Order directly responsible for the death of Khemu, son of the Medjay Bayek, in 49 BCE. The following year, he was tracked down by Bayek and slain in the Bent Pyramid of Sneferu as the first target on the Medjay's path of vengeance.

Quest for the Vault

Rudjek ruled Saqqara Nome from Giza, contributing to the natron trade around the mines in the region. Bearing the cryptonym "the Heron", he served as a member of the Order of the Ancients, a secret organization in Egypt whose goal was to impose a New World Order where they dominated the world and steered by way of their vision. The Order had given Rudjek everything, including significant wealth, which made him supportive of their puppet, Ptolemy XIII, but his allegiance to the Order itself stemmed purely from the status it lent him.[1]

In order to achieve their goals, Rudjek, alongside Flavius Metellus, Lucius Septimius, Pothinus and Medunamun, hoped to unlock the secrets of the Isu vault underneath the Temple of Amun in Siwa. There they gathered in 49 BCE with an Apple of Eden, but unable to find the means to open the gate to the vault, they concluded that their best lead would be the local Medjay Bayek.[2]

By exploiting the young village boy Chenzira and his mother, Rebecca, the Order was able to locate Bayek at Halma Point and capture him and his son Khemu. That night, Khemu and Bayek were brought to the Order in front of the vault, where Rudjek insisted to the latter that, as Medjay, a sacred guardian of Egypt's people and heritage, he must have some knowledge as to how to access the vault. His assumption was false, and while the members of the Order were preoccupied, Khemu stole a knife from Rudjek which Bayek used to break free from his bounds. In the following altercation, Flavius drove the knife into Khemu's chest, killing him instantly.[2]

The following year saw Rudjek pursued by a grief-stricken and vengeful Bayek. It was at the Bent Pyramid of Sneferu that the Heron met his doom. Trapped within the chambers with his sworn bodyguard Hypatos incapacitated, Rudjek trembled before his adversary but made one last attempt to reverse the situation by hurling the knife used to kill Khemu at Bayek's head. Though sudden and swift, the Medjay intercepted it with the Heron's mask that he held in his hand. With no options left, the Heron could only gaze in horror before Bayek furiously slammed his mask back into his face — the knife still embedded within it skewering his brain.[3]

After his death, Rudjek's wife never forgave Bayek for what happened, and when she met him again while he was visiting Nefertari, she kicked him in the groin.[4] Some time after his death, Rudjek's body was found by his mistress Suphia who laid him to rest and buried him in a tomb in the pyramid.[5][6] Both Suphia and Rudjek's bodyguard Hypatos, who survived his injuries, would go on to plot their revenge against Bayek in their own ways.[7][6] The latter tracked the Medjay for months until finally confronting him above an Old Kingdom tomb in the outskirts of Siwa, only to fall to his blades as well.[7] Suphia would meet a similar fate when her plan to infiltrate the rebels in Saqqara and lead them into an ambush by Ptolemy's soldiers failed to kill Bayek.[6]

In contrast to his compatriots, Rudjek lacked a sincere devotion to the cause of the Order of the Ancients. A man of weak ideals, he was to the very end a more or less average, if upper-class, individual with little aspirations other than a life of security and pleasure. For that reason, he felt himself fortunate to have become affiliated with the Order that bestowed upon him much wealth and many social connections. Quite the hedonist, Rudjek exploited his newfound power to increase his profits through the natron trade and acts of corruption, and the benefits he received from the Order far exceeded any that he could ever have dreamed of.[1]

However, his bitter end exposed the underlying truth that he was but a normal man sucked into a storm of dark conspiracies he was sorely underequipped to cope with. He was, in this sense, short-sighted, and his fervent support of Ptolemy XIII itself stemmed from the privileged position he enjoyed under him. This was to the extent that he could not fathom why anyone would ever oppose the boy pharaoh, lacking the capacity to understand that there were those who suffered under his regime.[1]

Rudjek is a character in Assassin's Creed: Origins. He is voiced by Canadian actor Kwasi Songui.

Rudjek's name, transliterated as rwḏ.k, translates to "you who is firm". This may be an allusion to his occupation, as rwdj literally means "[firm] like stone", and rwḏt is actually the Egyptian word for sandstone. As Rudjek was the Nomarch of Saqqara, a necropolis built almost entirely of stone, his name is quite fitting.

A head sculpt of Rudjek

A head render of Rudjek 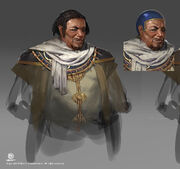 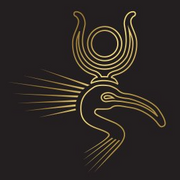