Assassin's Creed Wiki
Register
Don't have an account?
Sign In
Advertisement
in: Italy, Rome, Cities in Ancient Rome,
and 5 more

"Roma is the pillar that holds our entire enterprise aloft. She cannot waver; which means neither can you."
―Cesare Borgia to his allies.[src]

Rome (Italian: Roma) is the capital city of Italy. During the Renaissance, Rome was the capital of the Papal States and headquarters of the Italian sect of the Templar Order. Also, as part of Rome's liberation, the city became the base for the Italian branch of the Assassin Order.

Beginning of an empire

Archaeological evidence supports that Rome grew from pastoral settlements on Colle Palatino, the future site of the Roman Forum, upon which there are several caves. Eventually, the Republic of Rome was founded in c. 510 BCE, and the successful and wealthy Republic gave birth to the imperial Roman Empires c. 27 BCE, which were sprawling territories ruled by succeeding emperors.

In 476, the Western Roman Empire fell, and the Roman Catholic Church managed to take power in 756. After that, Rome became an economic and cultural powerhouse in Europe, even though Florence surpassed Rome as the centre of the Italian Renaissance. Due to the rivalry between the two cities, the papacy spent vast amounts of money to create cultural masterworks.

On 15 March 44 BCE, Gaius Julius Caesar was killed by the Assassins, led by Marcus Junius Brutus.[1]

In the year 41, the Assassin Leonius assassinated the Templar Caligula in Rome, whom he stabbed with a dagger.[2]

Saint Peter established the Church in Rome before his crucifixion in the Circus of Nero circa 68 CE.[2]

"I say we work here. In Roma. Erode the Borgia’s influence while restoring our own. And in fact, I want to begin right now."
―Ezio to his allies, before beginning the liberation of Rome, 1501.[src]

In 1476, Rodrigo Borgia, Grand Master of the Templar Order and a powerful figure in Vatican politics briefly left the city to discuss his Order's plans, before returning to affirm Papal approval. Assent was given by Pope Sixtus IV, and the Templars were provided with military support for their endeavors.[3]

In 1492, Rodrigo became Pope Alexander VI, and head of the Papal States and Catholic Church. Ruling from Rome, he was left alone by the Assassins for the most part, until 1499, when Ezio Auditore da Firenze learned that the Vatican Vault was located in Rome, beneath the Sistine Chapel.[2]

In 1500, following the Siege of Monteriggioni that was led by Cesare Borgia, Ezio returned to Rome to exact his revenge. At the time, the city had fallen far behind those of Florence and Venice, and had grown stagnant in terms of development, due to the influence of the Borgia.[4]

The Borgia maintained oppression over the city with towers located throughout Rome, which prevented shops from opening. In order to free Rome of the Borgia influence, Ezio killed the overlords of the towers and burned the structures themselves to the ground, taking them over for the Assassin Order afterwards.[4]

Additionally, due to the loss of Monteriggioni, Ezio established the Assassins Guild in Rome, and set up its headquarters on Tiber Island. By recruiting several Roman civilians as Assassin apprentices, the Brotherhood worked to free Rome of Templar control, which was accomplished by the death of Rodrigo in 1503 and the subsequent Pope Julius II having Cesare arrested.[4]

Three years later, the Hermeticists kidnapped Leonardo da Vinci to open the Temple of Pythagoras beneath Rome. Ezio rescued him, and the duo discovered the Pythagorean Vault inside the Temple, which gave the coordinates for the Grand Temple in North America.[5]

In 2012, the Assassin Clay Kaczmarek was tasked to infiltrate the Abstergo laboratory in Rome, as Subject 16 of the Animus Project. Clay remained in the lab for the remainder of his physical life, until the consequences of the Bleeding Effect drove him insane and led him to commit suicide. Clay would then continue to provide assistance within the Animus to his successor, Desmond Miles, via an implanted digital consciousness.

In September 2012, Desmond Miles was captured by the Templars and brought to the same facility in Rome. There, Desmond was marked Subject 17 of the Animus Project, in which Warren Vidic examined the genetic memories of Desmond's ancestor, Altaïr Ibn-La'Ahad, for a week. Desmond subsequently escaped from the facility with the help of Lucy Stillman, who in reality was a Templar part of Project Siren. The pair then made their way to an Assassin hideout nearby, where Desmond relived Ezio's memories in order to gain his abilities through the Bleeding Effect. Once Vidic and the Templars located the Assassins, Desmond and his team were forced to relocate to another safer location in Monteriggioni.

On October 10, 2012, Desmond Miles, Lucy Stillman, Rebecca Crane and Shaun Hastings returned to Rome to retrieve the Apple of Eden, after Desmond had relived Ezio's memories in Rome and found that the Assassin had locked the Piece of Eden in the Colosseum Vault, as well as leaving the password to unlock the Vault on the wall of the Sanctuary, where they were stationed.

On December 12, 2012, Desmond returned to Rome, to the same Abstergo laboratory he had been held in months before, to rescue his father who had been captured by the Templar organization. Desmond fought his way to Warren Vidic's office, killing Daniel Cross and many Abstergo guards along the way. There, Desmond managed to rescue his father and kill Vidic using his Apple of Eden, which he also used to escape the laboratory.

As well as this, Abstergo Industries used Rome as a simulated training location in the first and second stage of their Animi Training Program.

The simulation was set in the Centro District, depicting the market square, upon which a great many market stalls had been set up, located in front of the Pantheon and the surrounding residences. Although the Pantheon could be seen, its interior and exterior were inaccesible. The streets themselves were relatively spacious, but the many hidden alleyways allowed people to slip away from the masses with ease.

Rome, like most of the simulated locations in the first and second stage, had two aesthetic variations. As such, it could be utilized during the day or at dusk.

Landmarks in Rome included the Pantheon, the Colosseum, the Passetto di Borgo, the Castel Sant'Angelo and the Sistine Chapel.[2][4] 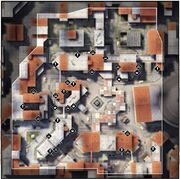 Ezio riding through the city towards the Pantheon

The Countryside of Rome concept art
Climbing rome.jpg
A wide view of the Centro district, seen from the Mercati di Traiano

A bird's-eye view of Rome

The centre of Borgia control, the Castel Sant'Angelo

Panoramic view of Rome at night

Panoramic view of Rome at dusk 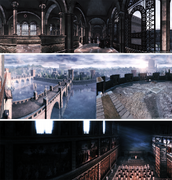