Video Summary: "Preparing to synchronize. Note that we are experiencing a small system glitch that may cause a subtle ringing in your ears. It should pass as you enter the memory.

"The new world was plundered in the 15th Century. Explorers became conquerors. La Noche Triste, or the Night of Sorrows, was a bloody uprising between the Aztecs and the Spanish conquistadors. Hernán Cortés himself was driven from Tenochtitlan. Firsthand reports of the massacre present opposing perspectives. Find the truth." 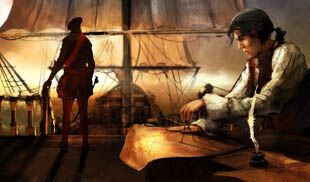 My hunt continues. We must find these relics of a previous world. Study them. The Brotherhood has made connections, leveraged deals, and ensured my place aboard Hernán Cortés' ship, bound for the New World. To México.

The Spaniards know me as Botello, a soldier and a scholar. I have worked hard to perfect my accent and my garb. They remain convinced that I am one of them. I am to chronicle their adventures, though necessity demands I omit certain events.

In The Thick Of It

We have landed! When we approach the Aztec capital, Tenochtitlan, we will be vastly outnumbered. If they are hostile, we stand no chance. Fortunately, we have allies will help us negotiate.

The view of Tenochtitlan is breathtaking! I never suspected the sheer scale of this civilization. The capital city is massive, intersected by causeways filled with boats, and grand temples reach towards the heavens. 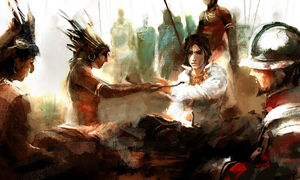 Moctezuma has invited us to stay in his own chambers. Some of my fellow conspirators believe he seeks to catch us off guard, but I hear genuine fervor in his voice. If he does not believe us gods, he wants to. Today is the Festival of Toxcatl, a significant day of ceremony.

As I search for the relic, I observe the strange customs and rituals of the Aztec people. They are happy to provide me with religious drawings and to share their legends, despite the complexity of translation. I add them to my journal.

I have not lost sight of my goal. With all of the idols and carvings in Tenochtitlan, I begin to doubt my chances of locating the relic. I have only a location, no description, and no one to help me.

Tezcatlipoca approaches the altar. The Spaniards grow violent as they realize what is happening. The priests reveal an obsidian dagger. Is it the relic? Another man, also dressed as Tezcatlipoca, is brought forward. This is to be a sacrifice!

The Spaniards have begun to slaughter the unarmed nobles of Tenochtitlan! I move towards the priest, who gapes at the attack, confused. He still holds the skull aloft. The Spaniards have not seen it yet. My time to act dwindles!

The Night of Sorrow 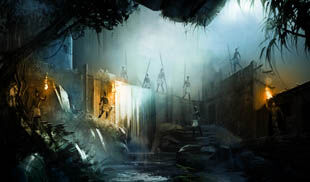 We hold out in Moctezuma's palace as the angry masses shout at us from outside. For now, they avoid entering the palace, likely due to its religious significance or perhaps because we hold their leader. Either way we will not survive if we stay here.

Cortes has decided to force Moctezuma to speak with his people. The Aztec will lie to them, gain us time to flee to the safety of Tlaxcala. Moctezuma no longer sides with us. His heart is filled with sorrow. He believes he has brought this upon his people.

The people of Tenochtitlan have removed the bridges from the causeways. They do not press us; they wait us out. They know we cannot escape, yet we must try. The Spaniards prepare for one final push out of the city. 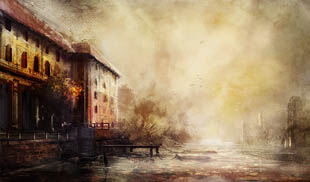 Few in the Brotherhood are as knowledgeable about the artifacts as I, but Bombastus spends his days studying them while I am out seeking more. He is an unpleasant man, loud and arrogant. He has few friends, but many colleagues. Perhaps he can help me solve my mystery.

Shell Of A Man

I've traveled to Basel to meet with Bombastus. He holds a new position in the city, an important one. I doubt he will hold it long. I enter his laboratory and find a deranged man scratching at the floor. He does not look up, but he shouts madness as I pass.

I remove the Skull from my pack and Bombastus' eyes set ablaze! He reaches out for it and I see no harm, so I hand it to him. He begins to take measurements and make sketches, all the while chattering to himself.

Bombastus holds his hands to the sides of his face as he studies the book. Blinders. "You must not take in too much at once," he explains.

I have lived a full life. I survived the disgrace of my family and their corruption of the church. I have seen, and survived, the dangers of the New World and much more. Yet the skull haunts me. The one question left unanswered.

Since my return from Tenochtitlan years ago, the Brothers have doubted my abilities. Though they admire the relic I recovered, they do not believe it is anything more than an ornate treasure. I remain persistent.