Video Summary: "Please wait a moment while we synchronize the DDS. You may find yourself daydreaming more often and sleeping less. This is a normal side effect of the program.

"Many of Rome's biggest names spent their leisure time indulging in its many brothels. They were ideal information hubs for those eager to scale the social ladder. Fiora Cavazza was one such courtesan. Investigate her contacts; find out who she knew, and what she did with that knowledge." 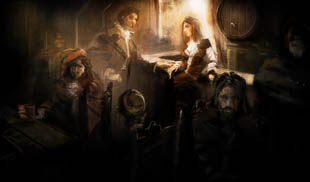 The Rosa in Fiore bustles with clients, most of them disgusting. Madonna Solari pushes us to mingle. Flirt. Romance. Seduce. Whatever necessary. Men of power are quick to share it for a night of fantasy. There is no shortage of coin nor hedonist in Roma and business has never been better.

Filth can be hidden by shadows. Foul smells masked by stronger scents, mostly imported. Disease is... difficult. Madonna Solari is quick to dismiss any girl with symptoms, but with so many sailors playing in foreign lands, I fear we face a losing battle. Still, our work continues.

The Jubilee has brought all types of people to Roma. Some famous. Some wealthy. We have a promising group of guests today. I put on a smile. A swagger to my step. This may be the day.


Tonight I am to escort Santino, madonna Solari’s brother. I will take one of his arms and Lucia the other. He is a dangerous man. A swindler. I complain but soon realize that no amount of protest will make any difference.

Santino enters the Rosa in Fiore. He wears a bruise on his cheek. A man follows behind him. Well-dressed. Hawk eyes. Noble. I recognize him at once – Cesare Borgia. Cesare studies the room, considering each girl. Our eyes lock and he smiles. He gestures me to him. 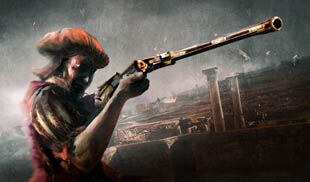 I have served the Borgia for six years now. Done horrible things. Seen the fantastic. I regret none of it. A war has made its way to Roma, fought in the streets, the senate, and the churches. Cesare has tasked me to coordinate his shadow army.

The Price of Faith

I have brought flesh for Brother Ristoro’s appetite. New girls eager for experience. In return, Ristoro has prepared church documents and trinkets for Cesare’s agents. I have avoided the worm since my time at the Rosa in Fiore. I hope he has forgotten my face.

Lia de Russo. Smuggler. She is not at our meeting point. She never is. I wait several minutes and then turn to leave. Suddenly, she steps into my path. I follow her into a locked shop that she has apparently claimed as one of her storehouses.

Cesare employs his own blacksmith, Auguste Oberlin. A former Swiss mercenary and craftsman in weapons. I knock on his shop door. My my. Aren’t you an ox of a man? Then he speaks. Articulate. Intelligent. I am shocked.

Gaspar de la Croix. Engineer. Marksman. Recluse. He frightens me, but his technical skills are unprecedented. His workshop is humble but overfilled. It is difficult to navigate without knocking over his myriad tools. 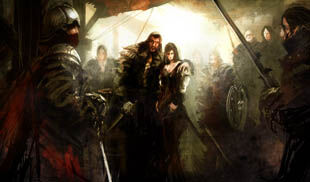 Cesare's personal collection of misfits and miscreants grows, their only purpose to create strife within Roma. I am to meet with his key soldiers. Coordinate plans. Provide supplies. Study his animals in the wild.

The condottiero Rocco Tiepolo collects warriors. Prides himself on acquiring exotic mercenaries and tactics. He is expensive, but the Borgia have no shortage of money. When I arrive, he is waiting for me. Food on the table. He pours wine.

Donato Mancini is Cesare's finest horseman, perhaps better than Cesare himself. The Borgia have gathered for a private race today. The Circo Massimo. I am to bribe Donato to let Cesare win. Threaten him if he will not.

Cesare has sent me to meet with the Cento Occhi. Thieves. Many of them young. Lanz is their leader and Cesare believes he has led an attack on a Borgia carriage. He provides me with evidence. Tells me to make a deal with the gang.

Cesare has employed a master spy. Baltasar de Silva. He hides behind the guise of a barber, though I am told he has no skill at it. Together, we will stalk Cesare's enemy - a league of assassins. There is much to learn. 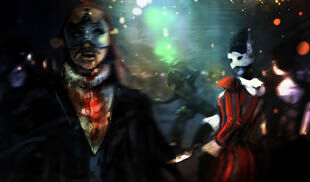 Cesare has put together an army of misfits. Cretins. I begin to doubt that he actually has a plan for Roma. It seems he has opened a cage let wild animals loose upon the city. Why has he chosen me to tame them?

I am dealing with fools! Two of them. Cahin and Caha. French. Brother and sister. Ridiculous costumes. Appropriate, I suppose, for this type of celebration. Our target has some claim to foreign royal blood, which they plan to spill.

They call him Il Carnefice. Everyone assumes that executioners love their work. It is easier to accept that way. Make them the villain. They wear masks to avoid this stigma when the mask comes off. Not Il Carnifice. He loves the work as well as the mask. He senses my distaste. Enjoys it.

Silvestro Sabbatini. Claims to be noble. Dresses the part, but poorly. He is a panderer, buying his way into social circles. Speaking with a black tongue. Cesare lopped off his left arm for failure. I am to deliver his second chance. 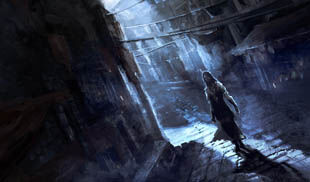 Cesare wants me to meet his murderous doctor, Malfatto, though I do not believe he really is a doctor. He is a predator of women. A monster. Cesare is testing my loyalty, but he may soon find he has destroyed what I had left.

A Taste For Violence

No sign of Malfatto. I am alone in the empty streets of Roma's poorest district. I have done my best to conceal myself, but I still feel vulnerable. Scared.

Cesare will not accept my refusal to find Malfatto. He will have me killed if I fail. After what I have seen his monster do, I cannot imagine those alleyways without shaking. Worse yet, he has asked me to wear one of my old courtesan outfits. Better to draw the monster's attention.

I am done with Cesare. Done with the mad people who surround him. I will leave Roma within the week. I return to the home Cesare has provided. Luxurious. Excessive. I drink to calm myself, but sleep does not come easy.

I live! My balance is off. My eyes struggle to stay clear. Malfatto is gone, but he has spilled his insides across my floor. They trail to my window. I cut him badly! Cesare will not protect me. I must appeal to his enemies. Offer a deal. 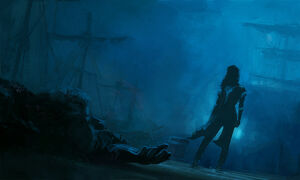 The Assassins have allowed me to follow them, but insist that I keep my distance as they deal with Cesare's agents from my list. I want to see them. I need to see that they finish the job.

I do not wish Rocco Tiepolo's death, but a large portion of Cesare's army owes him loyalty. We cannot hope to match the price, so he leaves us no other option.

We catch the fools performing on the street. They are involved in a ridiculous dance, fueled by a musician plucking at a battered instrument. They are too deep in their performance to notice the crowd changing around them.

The Assassins plan to hit Baltasar's barber shop. A decoy. I direct them towards his real hideout, which is blocks away. He will not be easily ambushed.

Baltasar escaped. I cannot afford to let him live. We spied on the Assassins together and I know more than they believe. I am a liability. On the other side, Baltasar may have told Cesare about my betrayal, which means the Borgia will be looking for me. I must find him!

Baltasar and I created Il Lupo. He dresses as his enemy. Wields their intricate weapons. Uses their techniques. Effective, if not perfect, imitations. With Baltasar dead, Il Lupo remains the only one who can tie me to any harm done to the Assassins.

Not While the Kid is Watching 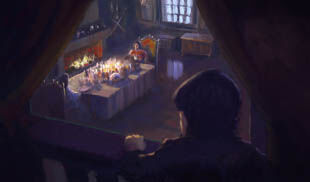 I've never seen Papà so angry. He broke three plates and threw his glass. He says he bought several men and they were all killed by a Sassin. I ask him what a Sassin is but he will not tell me.

Papà asked Fiora to eat dinner with him. Papà is angry with her. He says she is a liar. I told him she is nice, but he says she is still a liar.

I do not sleep much. Nonno says it is because my mind is too busy. He says that Papà, who is his son, had the same problem. Tonight, somebody else is awake. I hear their feet downstairs.

I leave Fiora and run to the Apple. Nanno [sic] keeps it in his Library. I remove the cover and the Apple glows! I hear Fiora walking in the hallway.

Retrieved from "https://assassinscreed.fandom.com/wiki/Rome:_Chapter_1_–_Fiora_Cavazza?oldid=809521"
Community content is available under CC-BY-SA unless otherwise noted.