The Hudson River Valley is a region in the American state of New York, stretching from Albany to New York City. It features historic towns such as Sleepy Hollow.

Despite the notes of explorers such as John Cabot about the gulf of the St. Lawrence River, Jacques Cartier was the first European explorer to sail in the River Valley with the aid of the Iroquois who had built their settlements there. He referred the northern area of the river as "Canada", mishearing it from the Huron-Iroquois word "Kanata", meaning "village".[1]

Since then, other explorers and fur traders opened the territory and the French started to build their settlements, limiting the westward expansion of the British. Threatened, the British clashed with the French, starting the Seven Years' War in 1755.[1]

During the war, the Templar Shay Cormac traveled to the River Valley to eliminate the Assassin threat and free the Iroquois. He also supported the British frontier against the colonies of the French.[2] 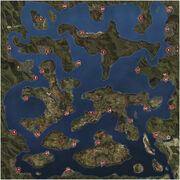