Richard I of England

"We come into the world kicking and screaming; violent and unstable. It is what we are, we cannot help ourselves."
―King Richard I, 1191.[src]-[m]

Richard I (1157 – 1199), commonly known as Richard the Lionheart, was the King of England from 1189 until his death in 1199. He was the second monarch of the House of Plantagenet. He was also the commander of the Crusader army during the Third Crusade, and was considered a great military leader and warrior.

Upon his death, he was succeeded as King of England by his younger brother, John.

"Even now, that heathen Saladin cuts through my men and I must attend to them. But perhaps having seen how vulnerable he is, he will reconsider his actions. Yes. In time, what you seek may be possible."
―Richard to Altaïr, 1191.[src]-[m]

Richard was born on 8 September 1157,[1] and like his brother John, he was the son of Henry II of England and Eleanor of Aquitaine.[2]

Prompted by Saladin's recapture of Jerusalem, Richard vowed to go on crusade. He was crowned king in September 1189 and, after remaining in England for only six months, set off for the Holy Land. During his journey, Richard scored a series of successes, notably conquering Sicily and retaking Acre.[3]

In 1191, Richard departed from Acre with his army to move south, and left William of Montferrat as Regent Lord of Acre, unaware that William was secretly a member of the Templar conspiracy who intended to betray him. Fortunately for the oblivious Richard, William was killed by the Assassin Altaïr Ibn-La'Ahad soon after Richard had left Acre.[4]

Altaïr then claimed that Robert de Sablé, Grand Master of the Templar Order and one of the lieutenants of Richard, intended to betray the king. However, Robert insisted that Altaïr's story was merely a ruse to keep Richard from interfering in the Assassin's mission.[5]

Unsure on who to believe, Richard left the decision in the hands of God, declaring that Robert and his Templars were to fight Altaïr in a trial by combat. Ultimately, Altaïr proved the victor, and so Richard accepted the Assassin's version of events. Richard and Altaïr then discussed the philosophies of war and peace, with Richard admitting that he was not yet ready for peace with Saladin. As Altaïr left, saying that he needed to confront the faults of his Master, Richard reminded him that Al Mualim was merely human, just as he was.[5]

The revelation that his conflict with the Saracens had been exploited by the Templars eventually led Richard to make peace with Saladin. He would then head back home in 1192.[8]

After his death in battle at 1199, Richard was succeeded by his brother John Lackland, who was later manipulated by the Templars during his rule as king.

From 1851 to 1856, the artist Carlo Marochetti created a nine meter tall bronze statue of Richard I on his horse. The statue titled Richard Coeur de Lion is situated near Westminster Palace in London. The horse in the statue has its front foreleg up to symbolize Richard's death in battle.[9]

In October 2016, the Templar historian Simon Hathaway noted that King Richard and his House of Plantagenet were nigh-legendary figures who had figured into the history of Chinon.[2]

Richard was a man strong in faith, and relied upon God for crucial decisions. He did, however, seem tolerant towards non-believers, as Altaïr denying the help of God in his victory against Robert did not trouble him.[5] Richard was also extremely tall, standing at six feet and four inches, towering over most men in his time.[9]

Richard believed that mankind could never change. In his mind, the only way for him to bring peace was for his men to crush their enemies, Saladin and the Saracens.[5]

Richard armed himself with a sword and shield and displayed a proficiency to wield them.[5] He displayed advanced martial and political leadership skills, his courage and combat ability were also considered to be legendary.[9] 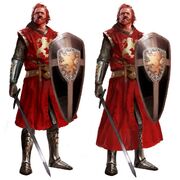 Close-up of Richard talking to Altaïr