Assassin's Creed Wiki
Register
Don't have an account?
Sign In
Advertisement
in: Articles revamp, Article stubs, Timeline, Instruments of the First Will

Resurrection Day was the event which saw the culmination of the Instruments of the First Will's plot to return the digitised Isu Juno to corporeal form.

The collective hijacked Abstergo Industries' Phoenix Project, a yearslong initiative to clone the Isu back from extinction, but their efforts were undone by a rare alliance between Assassin and Templar agents who united against their common threat and ensured that Juno's rebirth was shortlived.

After gaining control of the Koh-i-Noor, the Instruments breached Álvaro Gramática's lab wherein they forced him to use DNA samples from Elijah and other Sages to bio-engineer a female Isu body for Juno's essence to inhabit.

While this attempt was successful, Assassins and Templars infiltrated the lab as well. Charlotte de la Cruz killed Juno, though she perished, too.[1] 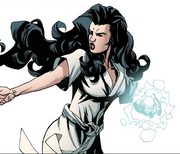