Regan (died 870s) was the second daughter of Lerion, a wealthy East Anglian ealdorman who plotted to kill the Mercian king Burgred. The plot was foiled by King Edmund of East Anglia before it had hatched, leading to Lerion's arrest and execution for treason. Regan and her sisters, fearing they would suffer their father's fate or worse, fled into the fens of East Anglia and disappeared.[1]

During the 870s, the shieldmaiden Eivor Varinsdottir eventually fought and killed Regan while exploring England, claiming her dagger.[2]

The story of Lerion and his daughters is likely inspired by the legendary figure of the same name, which was used by the playwright William Shakespeare as the basis for his play King Lear.[3] 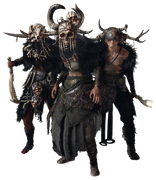 Database image of Regan (middle) and her sisters 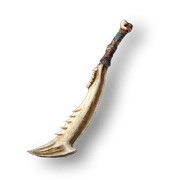