"Such is our role, Nerkaa. The few of us must stand against very many."
―Qulan Gal to Nergüi, regarding the Mongolian Assassins, 1227.[src]

Qulan Gal was a member of the Mongolian Brotherhood of Assassins. He was one of the Order's most renowned members, due to his vital role in the assassination of Genghis Khan alongside Darim, Altaïr Ibn-La'Ahad's son.

Qulan Gal was a member of the Assassin Order, operating mainly in the Mongol Empire. He was a renowned toxophilite, with his skill in archery later being hailed by the Order.[1]

During the early 13th century, the conqueror Genghis Khan caused turmoil in Mongolia, quickly overtaking land with a Sword of Eden. As a result of Genghis Khan's tyranny, Qulan Gal swore to stand against him, and was later integral in Genghis's assassination.[1]

At some point during 1217 and 1227, Qulan Gal came into contact with the Mentor of the Levantine Assassins, Altaïr Ibn-La'Ahad, his wife Maria and his son Darim.[2]

In 1227, the four of them devised a plan to assassinate Genghis Khan in his camp in Xingqing in Xia Province. While Qulan Gal and Altaïr went into the camp together, Darim and Maria covered them from a distance, respectively with his crossbow and her bow.[2] However, Altaïr unknowingly allowed himself to be seen and was attacked by a Mongol soldier, though Qulan killed the Mongol before he could raise the alarm. From there, Qulan safely escorted the injured Altaïr out of the camp, also rescuing a young novice who was captured while scouting the area, Nergüi. Joining Darim and Maria on the nearby hill, the five Assassins proceeded to compose another plan.[3]

The Assassins then devised to flush Khan out of his tent by setting the mongol camp ablaze with flaming arrows; the plan was successful, and the Khan fled. Pursuing the Khan with Darim, Qulan Gal acted quickly, killing several guards and shooting the Khan's horse, causing him to fall off, which injured him on impact with the ground. Afterwards, Darim shot the conqueror with his crossbow, finishing the Khan off.[2]

Later, while the two mongols were parting ways with the Ibn-La'Ahads, Altair suggested that Qulan Gal take an apprentice and Qulan decided to take the young Nergüi under his wing.[3]

Several years later, Genghis had been succeeded by his third son Ögedei. During this time, Qulan told Nergüi that he was soon ready to be formally inducted into the Brotherhood. Before this could happen however, Qulan instructed Nergüi to travel to Samarkand. Ögedei had sent an entire tumen to reinforce the city, and Nergüi was to assassinate their captain without being detected by the large force.[4]

After discreetly killing the captain, Nergüi returned to Qulan and informed him of his success. They then met with the Mentor of the Mongolian Assassins, who inducted Nergüi into the Brotherhood and gave him his own Hidden Blade.[4]

In 1241, Qulan told Nergüi of Batu Khan, the founder of the Golden Horde who was tearing through Russia. In order to slow his advance, Nergüi was tasked with assassinating Ögedei Khan, while Qulan assassinated the Khan's brother, Chagatai. With no ready successor to the throne, Batu would be forced to return to Mongolia. Both of the Assassins proved successful in their endeavors.[4]

Qulan Gal's role in the assassination of Genghis Khan, which allowed the Assassin Order to spread its influence within the Mongol Empire,[2] earned Qulan Gal great praise amongst his brethren—so much so that a statue honouring him was erected in the Sanctuary underneath the Villa Auditore in Monteriggioni, Italy.[1]

By the time of the Renaissance, Qulan Gal was entombed by the Italian Brotherhood of Assassins in Italy underneath the Rocca di Ravaldino in Forlì, Italy.[4] Sometime before 1497, the Italian Assassin Ezio Auditore explored the tomb and took the hidden seal from the Qulan Gal's sarcophagus, which later allowed him to obtain the Armor of Altaïr Ibn-La'Ahad sealed in the Sanctuary beneath Villa Auditore in Monteriggioni.[5] 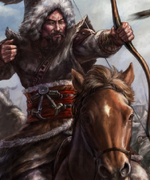 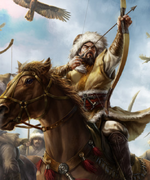 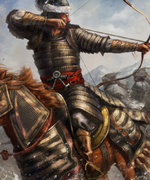 Statue in the Sanctuary