Roman Republic
Order of the Ancients

Ptahmose (died 38 BCE) was an Egyptian official and member of the Order of the Ancients who operated under the cryptonym The Mason and who served Gaius Julius Rufio in the Sinai, overseeing construction projects in the city of Arsinoe in Egypt.

In 38 BCE, Ptahmose was instructed by Rufio to oversee the demolition of various Egyptian landmarks across the Sinai in order to recycle the raw materials in the construction of Roman infrastructure and to sell the artifacts to fund Roman war efforts. His particular role in the Order of the Ancients was to find and collect shards of a star, this being his genuine impetus for ravaging Amenmesse's pyramid. Ptahmose was assassinated in his camp in Arsinoe by the Hidden One Bayek of Siwa, thus stopping his pillaging of Egyptian temples and monuments.[1]

Ptahmose was an enterprising and pitiless man. He pushed his workers too hard, and when someone stepped out of line, he made an example out of them. In fact, he showed barely more concern for the well-beings of his servants than he did his Nabataean rebel prisoners, whom he instructed his guards to interrogate via torture.

Despite being Egyptian, Ptahmose felt no affection for his people or culture. He had no qualms about destroying ancient Egyptian monuments to cannibalize the raw materials and pillaging its treasures to fund the Roman war machine. At his death, he felt no remorse for his actions, insisting that the Order was eternal.[2] 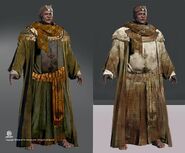