"Of course, I only use terms war, or god, or civility, in context of what can be observed. So, I can observe soldiers fighting, but does that bring me any closer to understand war?"
―Protagoras to Hermippos, 431 BCE[src]-[m]

Protagoras (c. 490 – c. 420 BCE) was a Greek philosopher and sophist who was credited by Plato with inventing the role of the professional sophist.

An acquaintance of the Athenian statesman Perikles, Protagoras was invited to a symposium held at his residence in Athens. There, he participated in a debate with the playwright Hermippos, who urged him to drink more. Protagoras and Hermippos were later joined by the misthios Kassandra, who provided her thoughts about Kleon.[1] A while later, Protagoras was one of the guests to greet Aspasia, Perikles' partner, upon her arrival.[1]

During the Plague of Athens in 429 BCE, Protagoras was visited Perikles' residence again alongside his other associates.[2]

Close up of Protagoras 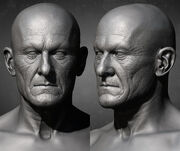 Protagoras with Kassandra and Hermippos

Protagoras shaking hands with Aspasia
Add a photo to this gallery

Retrieved from "https://assassinscreed.fandom.com/wiki/Protagoras?oldid=847446"
Community content is available under CC-BY-SA unless otherwise noted.