Prison, also referred to as Cartagena Jail, was originally a fort and later a prison located on the northern coast of Colombia.

The prison of Cartagena was originally built as a fort to defend the city's harbor from pirates. However, the fort was converted to a prison when the pirates became a bigger threat to the area. The prison held all kinds of criminals within its walls, unsegregated in large, locked rooms. Violence was not excluded; besides personal fights and quarrels, prisoners were often abused by the prison guards and subject to torture.

In 2013, the prison was used as a simulated location created by Abstergo Industries' entertainment branch, for the console stage of their Animus technology.

The simulation depicted Prison as a complex stone fortress, walled by four sides. An open courtyard was located in the middle, with a gallow prepared at its center. Overlooking the square was a watchtower, with prison guards patrolling the outer walls. Inside the settlement several jail cells could be found, as well as a public kitchen and sleeping quarters. Torture devices were scattered around the place, some with live people inside them. Overall, the prison radiated filthiness and misery and the prisoners screaming for help could be heard continuously.

With the implementation of new technology, simulated locations in the console stage were upgraded to have multiple aesthetic variations, as well as dynamic weather. Because of this, Prison could be utilized during the day, the night, or amidst rain.

The Cutthroat being killed by the Buccaneer in the prison's courtyard 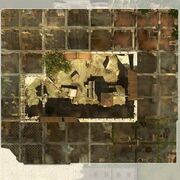 An aerial view of Prison
Add a photo to this gallery

Retrieved from "https://assassinscreed.fandom.com/wiki/Prison,_Cartagena?oldid=792292"
Community content is available under CC-BY-SA unless otherwise noted.