"Grown tired of listening to people's confessions, desperate to see the world in which mankind lives, the Priest made himself an angel of death. After spotting his target, he makes the lost sheep kneel before him and gives them salvation with his Holy Blade."
―Description of the Priest.

The Priest (harvested from: Ristoro) was an Animi Avatar used by Abstergo Industries, to train the recruits in the first stage of their Animi Training Program. He used a holy dagger as his weapon, which was a blade that could retract into its hilt.

The Priest had several unique moves:

The Priest casually walks up to his target and stealthily removes his holy dagger, before bending forward and thrusting the blade of his weapon upward into their abdomen, puncturing their heart through their ribcage and killing his victim instantly.

The Priest walks up to his target from behind and removes his holy dagger, before lifting his weapon up high and driving it down into the base of their neck, causing his victim to go limp and fall to the ground as their nervous system is punctured.

The Priest runs up to his target and knees them forcefully in the stomach, winding them and causing them to bend forward as they try to regain their breath. He then unsheathes his holy dagger and stabs downward, piercing the vertebrae at the base of the neck and sending his victim crumpling to the floor, heavily paralyzed and bleeding out.

The Priest rushes over to his target and kicks them in the back of their legs, making them kneel, before removing his holy dagger one-handedly and stabbing them in between their shoulder blades. With this, the blade pierces into his victim's nervous system, paralyzing them, with the Priest leaving them to die as they fall forward.

The Priest walks up to his seated target and grabs them by the back of their head, forcing it downwards, so that they are leaning forward and facing the floor. Following this, he removes his holy dagger from its case with one hand, whilst holding his other hand up in the air in a gesture of benediction, before mercilessly stabbing them in between their shoulder blades. As the strike paralyzes his victim and sends them slumping to the floor, the Priest leaves them while they die from exsanguination (blood loss).

The Priest leaps from above a rooftop and takes out his holy dagger in mid-air, before he lands on his target. Afterwards, he sinks the blade of his weapon into their upper back, before removing his dagger from his victim's body and leaving them on the floor for dead.

The Priest could be customized in several ways:

Concept art for the Priest 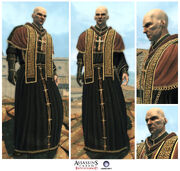 Official artwork for the Priest