Poseidon was an Isu who was revered in Greek mythology as the god the seas, the ocean, horses, and earthquakes. The brother of Hades and Zeus, he fathered at least ten sons: Atlas, Diaprepes, Mestor, Azaes, Ampheres, Gadiros, Elasippos, Mneseas, Evaimon, and Autochthonos. His equivalent in Roman mythology is Neptune.

Poseidon was the ruler of the city of Atlantis, where he was known as the Trident King and Dikastes Basileus (Grand Adjudicator). After Atlantis came to be ruled by Atlas, Poseidon, seeking power for himself, supplanted his own son as the reigning monarch and instead gave all his children the subordinate position of Archon to manage the city's affairs.

During the Isu Era, Poseidon ruled the Isu city of Atlantis as Dikastes Basileus (Grand Adjudicator), having deposed his own son Atlas to take control of the throne for himself. To better manage the city's affairs, Poseidon appointed his sons as Archons, each managing an area of the city. Although Poseidon expected Atlas was the one with the talents to succeed him in time, Poseidon played favorites with his children and considered Gadiros his most beloved.[1]

Poseidon implemented a cycle system for Atlantis wherein the city would be destroyed and reconstituted afresh every seven years if it was judged to be imperfect. To help bear the weight of responsbility to Atlantis' co-existing Isu and human population, and with Atlas seen as not yet fit for the task, Poseidon eventually appointed an individual as Dikastes, whose role was to carry out and enforce judgement within the realm. One such Dikastes appointed by Poseidon was Aletheia.[1]

At some point, Poseidon provided Aita and his wife Juno access to Atlantis, who both used the opportunity to secretly work on the Olympos Project, an experiment to develop a series of hybrid beasts, using abducted humans as guinea-pigs and powered by purpose-built Precursor relics, one which Poseidon eventually discovered with the help of Aletheia. Appalled by the experiments and Juno's mistrust against the humans, Poseidon banned Aita, Juno, and their followers from his city, sending them back to Feyan. He would also initiate a ban on any human experimentation in the city.[1]

During the Peloponnesian War, the Spartan misthios Kassandra obtained Poseidon's Trident from within the ruins of a temple dedicated to him on a small Samian island. This trident was a weapon attributed to Poseidon that allowed the wielder to breathe underwater and was said to "control the seas".[2]

The Areopagus in Athens was said to have been the place where the god of war Ares was judged for killing one of Poseidon's sons.[3]

Throughout the Greek world, there were numerous temples dedicated to the god, and some like the Erechtheion on the Akropolis Sanctuary in Athens was dedicated many gods at the same time. There was also the region of Korinthia dedicated to Poseidon: the Isthmus of Poseidon, housing the Sanctuary of Isthmia, home to the Isthmian Games.[2] Lesser shrines and altars, like Kolonos Hippios in Attika, also dotted the landscape.[4]

After imbibing lotus flower wine, Barnabas had three visions concerning his wife Leda. In one of these, he swore that Poseidon, along with Thoosa, held his hand as they guided him down to the depths of Drakontospilo on Anaphi.[5]

In 48 BCE, Poseidon was often invoked by Phoxidas during his time sailing the seas with Aya.[6]

According to the story of the death of Hippolytos, the hero Theseus' son, Poseidon played a part in it. Angered by what his wife Phaidra claimed Hippolytos to have done, Theseus invoked the god to kill Hippolytos. Poseidon summoned a sea monster, and Hippolytos died within the Sinkholes of Herakles in Argolis, in a chariot accident.[7]

Poseidon was rumored to have fathered Byzas with the nymph Keroessa. Byzas later became the founder of Byzantium, which was renamed sometime after as Constantinople.[8] While Amphitrite, wife of Poseidon and queen of the sea, was said to have birthed his other son Triton, who had a conch shell to control the sea.[9] Poseidon is also named as the father of the legendary horse Areion.[10]

According to stories told on Naxos Island, a mortal woman by the name of Iphimedeia fell in love with Poseidon, and was in the habit of walking the shores, gathering sea water into her lap. Later, she gave birth to twin giant sons, the Aloadai Otos and Ephialtes.[11]

Orion the Giant was also a son of Poseidon, allegedly born in Boeotia.[12]

During the Peloponnesian War, a simulated version of Poseidon was created by Aletheia within her simulations intended for the Spartan misthios Kassandra..[13]

According to the myths, the Titan Kronos devoured every child he begat with his sister-wife Rhea. When Zeus saved his siblings, they accompanied him as the new gods, and became part of the twelve mightiest. In order from oldest to youngest, the children were Hestia, Demeter, Hera, Hades and Poseidon before Zeus.

The mural depicting Poseidon in Assassin's Creed: Odyssey is based on a painting on an amphora from Late Classical period, depicting the Battle of the Giants and Gods.

According to The Art of Assassin's Creed: Odyssey, the trident amulets worn by Barnabas and Mydon are in reference to Poseidon. 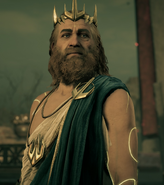 Close-up of Poseidon in the simulation of the Underworld

A statue of Poseidon in Sanctuary of Olympia

A statue of Poseidon on an island 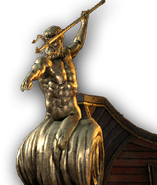 The figurehead of the ship Adrestia featuring Poseidon

A statue of Poseidon in Pellene 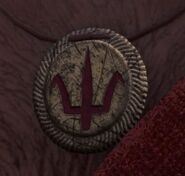 An amulet of Poseidon

Poseidon depicted in a mural in 5th century BCE Greece, with Ares (left) and Artemis (right)

A statue of Poseidon in Atlantis