The poppy is a term used of the flowers in the family Papaveraceae, informally known as the 'poppy family'.

In 5th century BCE Greece, the poppies were commonly known as the 'flowers of Aphrodite', said to have been planted by the Greek goddess of love and beauty herself. The blacksmith of Opous, Kosta, asked the Spartan misthios Kassandra to gather some of the flowers from the nearby forest of the Red Lake, as he believed they would have an invigorating effect on a human, carrying "the fire from one's heart to one's crotch".[1]

Due to their red colour, the flowers were also grown in abundance in Sparta during the Peloponnesian War.[2]

In the 1st century BCE Egypt the Medjay Bayek of Siwa found a mace named Minoan Poppy Pin, named so due to the similarity of the mace's head to the seedpod of the poppy.[3]

During the Renaissance, the Italian Assassin Ezio Auditore da Firenze gathered Papaver silvaticum in Rome. It was noted as the source of the addicting drug Opium, named after the flower.[4]

In Victorian era United Kingdom, gathering flowers was a pastime well looked-upon, and the hobby grew popular enough for a book to be written on the meanings of different flowers. The Assassins Evie Frye and Henry Green participated in it as well, communicating their relationship in a covert manner.[5] The poppies of the species Papaver orientale, the Oriental poppy, were among the ones they gathered. According to the Language of Flowers, the red poppy was a symbol of consolation, while the white poppy was used to express "my bane, my antidote." The poppies' juice was also noted to be used as a sedative for both pain and restlessness.[6] 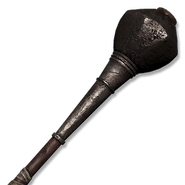 Retrieved from "https://assassinscreed.fandom.com/wiki/Poppy?oldid=848524"
Community content is available under CC-BY-SA unless otherwise noted.