Polykaste the Jilted was a mercenary who operated in Korinthia during the Peloponnesian War.

After being abandoned by her lover, she vowed that she would travel the Peloponnese and hunt down the goddess Athena, for her lover claimed that it was that same goddess who made him vow never to fall in love.  During this hunt, she took her anger out on anyone who crossed her path.

While said conflict was ongoing, Polykaste crossed paths with the Spartan misthios Kassandra, who accepted a bounty contract on the former.[1] 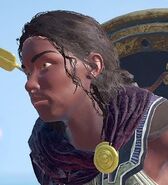