"Many people these days consider many pirates to have been rather progressive socialists with community-minded consciences, which I rather feel takes away from their mystique."
―Shaun Hastings.[src]

Piracy is a criminal act of robbery or violence, typically at sea, and can also range from naval warfare and coastal raids. Acts of piracy can be committed on land, in the air, or near bodies of water including shores.

An individual who participates in piracy is known as a pirate, though they should not be confused with privateers, who were state-sponsored sailors allowed to steal from the ships of enemy countries. [citation needed]

In the early 18th century, a large number of pirates, privateers, and other sailors congregated in the recently captured settlement of Nassau and together formed the Brethren of the Coast, in order to better represent and coordinate their interests.[1]

Around the time of the Peloponnesian War pirates were a common sight on the Aegean Sea. The Spartan misthios Kassandra encountered them often aboard the Adrestia, a trireme Kassandra commanded and whose captain Barnabas was.[2] Occasionally, Kassandra took on a bounty for especially mighty pirate ships,[3] or agreed to help people by sinking various pirate vessels.

Pirates sailed the Mediterranean Sea during the Middle Ages, including a group of Cypriot pirates who allied themselves with the Templars controlling Cyprus. During Altaïr Ibn-La'Ahad's trip to Cyprus in 1191, a pirate named Pasha sailed him to Kyrenia. However, the majority of the pirates there attempted to capture him for the Templars. When Altaïr returned to Limassol, he assassinated their captain.[4]

In 1321, the Templars in Italy hired pirates to steal Altaïr Ibn-La'Ahad's Codex from Domenico Auditore, murdering his wife in the process.[5]

In 1511, Al-Scarab was an honorable pirate who sought revenge on Ezio Auditore da Firenze for humiliating him, but after they worked together to fight off some watchmen, he returned the favor by sailing him to Acre.[6] Soon after, the Ottoman Assassins allied with the corsair Hayreddin Barbarossa to undermine Spanish control of Algiers. Also active at the time was the Templar pirate Eveline Guerra, and Blaise Legros, whose only loyalty was to money, transporting Templars and Assassins wherever they desired so long as they could pay him.[7]

During this time, William Kidd was a Scottish privateer active in the area. He was captured and executed on charges of piracy in 1701, but in truth, the accusations were made by Templars, hoping he would reveal the location of the Shard of Eden he had found.[9]

Alonzo Batilla and Olivier Levasseur were French privateers-turned-pirates operating in the Caribbean during the early 18th century. Levasseur, better known as La Buse, would later be executed by the British.[8]

Edward Kenway was a British privateer-turned-pirate active in the Caribbean, who joined the Assassins later into his life. In the pirate republic of Nassau, there were pirates such as Stede Bonnet, Mary Read, Edward Thatch, Benjamin Hornigold, John Cockram, Josiah Burgess, Charles Vane, Jack Rackham, Adéwalé, Anne Bonny, and Christopher Condent, with many of them eventually banding together to form a coalition they referred to as "the Brethren of the Coast". By September 1715, almost five hundred men had joined the Brethren. However their capital, Nassau, fell to the British in 1718, quickly discouraging many members from staying. Most of the captains who had formed the group died over the years, leading to the Brethren's dissolution by 1722.[1]

During the mid 18th century, the pirates Joseph Reed and William Crest made a fortune attacking trade ships in the Atlantic Ocean. However, their Men O' War, the Pilgrim and the Cauldron, were eventually sunk by Shay Cormac's ship, the Morrigan.[10]

Though the emblem of the pirates in Assassin's Creed: Odyssey seems to be based on a 3rd century BC mosaic of a dragon from Caulonia,[11] according to the Discovery Tour: Ancient Greece, it's based on coins from Halikarnassos.[12]

Concept art of a pirate ship on fire near a canoe

A mosaic of Cilician pirates

The Treaty of Utrecht

The Pirate code of Bartholomew Roberts

One of the letters of marque supporting privateering

Hornigold speaking with a captive crewman

Edward Kenway with a captured crew 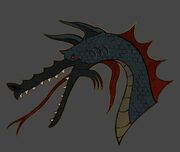 Retrieved from "https://assassinscreed.fandom.com/wiki/Piracy?oldid=860020"
Community content is available under CC-BY-SA unless otherwise noted.