A pilum is a type of javelin commonly utilized ever since its conception in.

by soldiers of the Roman Army.[1]

During the Peloponnesian War in Greece, the Spartan misthios Kassandra found the pilum in the inventories of blacksmiths and looted it from bodies and chests throughout Greece.[2]

In 48 BCE Benipe, the blacksmith of Siwa, Egypt, procured a deadly spear that was erroneously called the Pilum. This was among four specialty weapons that Benipe was able to hide from the forces of Pharaoh Ptolemy XIII when they confiscated all his tools and products, accusing him of harboring rebellion. After the Medjay Bayek of Siwa assassinated the captain in charge of this incident and recovered Benipe's tools, the blacksmith presented the Medjay with the Pilum alongside the other aforementioned three weapons: the Bitter Bow, the Gruesome Mattock, and the Phalanx Shield.[3]

The Pilum, a weapon in Assassin's Creed: Origins, appears as a rare spear in spite of the fact that a pilum is properly a Roman javelin and the description of the weapon even describes it as such. The Pilum in the same game is also among the four rewards the player may choose from upon completing the side-quest Striking the Anvil.

In Assassin's Creed: Odyssey, the Pilum was even further removed from its origins, and was merely another spear among others. It shares the same model as a number of other similar weapons in the same game, including the Spear of Kephalos. What's more, the model was the recycled model of the Iron Spear, a weapon in Assassin's Creed: Origins. 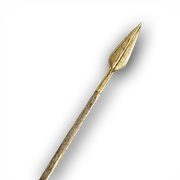 The Pilum of 5th century BCE

Kassandra wielding a variant of the spear

Benipe's pilum
Add a photo to this gallery

Retrieved from "https://assassinscreed.fandom.com/wiki/Pilum?oldid=878000"
Community content is available under CC-BY-SA unless otherwise noted.