The pigeon coop, as well as the courier pigeons they house, is a means of communication which were historically used by the Assassins to covertly trade messages and assignments.

During the late 9th century, under Flann Sinna's reign as High King of Ireland, pigeon coops were found in cities, towns, and trading posts across the country. Every pigeon coop corresponded to the regions of Ulster, Connacht, and Meath and the royal demands of their kings. The royals demands on the pigeon coops detailed the kings' large issues that needed solving immediately. The Viking jarlskona Eivor Varinsdottir of the Raven Clan was told about these pigeon coops by Flann's poetess and advisor, Ciara ingen Medba.[1] Eivor used these pigeon coops to gain influence and support from these kings, in order to garner support for Flann Sinna's rule in the aforementioned regions.

During the Third Crusade, coops were located within Masyaf and the local Assassin bureau of each city. Messages were often sent to the Rafiq of the Bureau to inform them of contracts, or of the arrival of certain Assassins in their city. During the Hunt for the Nine, the Mentor Al Mualim sent pigeons from his study to the cities of Damascus, Acre, and Jerusalem to inform the local Rafiqs of Altaïr Ibn-La'Ahad's eminent arrival in the city, and of his current target.[2]

At the time of the Renaissance and Late Middle Ages, most of the contracts sent by pigeon were assigned by Lorenzo de' Medici, and were executed by Giovanni Auditore, and later, by his son Ezio.[3] Mario Auditore also made use of pigeons in Monteriggioni, though mostly to collect the information gathered by spies he sent to other cities.[4]

As most rooftops were restricted to civilians, Assassins and their allies were easily able to leave messages at pigeon coops to be later picked up by members of the Order.[4] Fiora Cavazza relied on this fact when she betrayed the Templars, choosing to wait near a pigeon coop and speaking with a guard she had seen leave a message in a nest. [citation needed] However, this method was still prone to flaws, as when Francesco Vecellio sent a message to Giovanni Borgia by a carrier pigeon, only for it to fly straight into his room instead of the coop as intended. [citation needed]

When the Italian Assassins built their brotherhood in Rome, Niccolò Machiavelli managed to plant several spies in the Borgia forces. These men gathered the names of important Templar figures, which were in turn delivered to Ezio Auditore through pigeon coops around Rome. To receive more assignments, Ezio spoke with Pantasilea Baglioni, who would inform him of Machiavelli's progress and the type of contracts available. Through these coops, not only could Ezio accept contracts, but he could also assign his apprentices their own missions, as well as improve their armor and weapons.[5] In Constantinople, pigeon coops were always located near the ground, in secluded areas next to bomb-crafting stations. Though they functioned similarly, they were also noticeably smaller than those found in Italy.[6]

In the early 18th century, the Assassins continued to use pigeon coops, and had several stationed on islands around the West Indies. The pirate Edward Kenway used these coops to receive contracts, the targets of which were often located on islands nearby.[7] 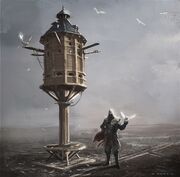 Concept art of a pigeon coop in Rome

Altaïr standing near a pigeon coop in an Assassin bureau

Ezio retrieving a message from a pigeon coop in Florence

A pigeon coop in Havana

A pigeon coop in New Orleans

A pigeon coop in Medieval Ireland

Concept art of Eivor at an Irish pigeon coop