Cleopatra (until 47 BCE)
Hidden Ones

Phoxidas (born c. 88 BCE), also called Phox, was a Greek mercenary and Nauarchos ('Leader of the ships', Admiral) who first served Ptolemy XII Auletes, and then his daughter Cleopatra during the 1st century BCE before joining the Hidden Ones in their fight against the Order of the Ancients. Through this service, Phoxidas met Aya of Alexandria—another of Cleopatra's confidantes—and the two worked together many times.

"By Zeus, I have not seen this much action since the earliest days of Cleopatra's father."
―Phoxidas to Aya and Bayek, 48 BCE.[src]-[m]

Born in Athens in 88 BCE, Phoxidas came to serve Ptolemy XII Auletes in Egypt during his reign.[1]

At some point around 68 BCE, Phoxidas sailed with a group of Sicilian pirates, as a 'hired hull', but that lifestyle didn't suit Phoxidas, so he parted ways with them.[2]

Phoxidas was also married and had children, but left them all as, according to him, they didn't accept him for who he was.[3]

Following the rise of Ptolemy XII's son and daughter, Ptolemy XIII and Cleopatra, Phoxidas was contacted by Aya, and via her came to serve Cleopatra, becoming one of her most loyal followers. Before 48 BCE, one of Apollodorus' informants, Damastes joined Phoxidas' crew, and became his right hand man.[4]

In 48 BCE, Phoxidas and Aya were sent by Cleopatra to the Aegean Sea to assist the military General Pompey and initiate an alliance with him. Encountering and destroying several ships sent by Ptolemy XIII, Phoxidas and Aya succeeded in aiding the Roman general, who accepted the alliance and made his way to Egypt.[3]

Sometime later that year, Phoxidas and Aya were dispatched to the Mediterranean Sea to defend the seas. During their mission, they encountered a Gabiniani fleet who served under Ptolemy XIII. Despite the Gabiniani's overwhelming numbers, Phoxidas' fleet was able to defeat the enemy fleet before returning to Egypt.[5]

After Cleopatra ascended the throne as the sole pharaoh of Egypt, allying herself with Julius Caesar and seemingly with Flavius Metellus and Lucius Septimius, who were both members of the Order of the Ancients, Phoxidas met with Aya and Bayek in a tavern in Alexandria, along with Bayek's other associates, Phanos the Younger, Pasherenptah, and Tahira. Expressing their disgust with Cleopatra's alignment, they agreed to form an organization and combat against the Order of the Ancients and preserve the free will of the people.[6]

While Bayek pursued Flavius to Cyrene in Cyrenaica, Phoxidas remained in Alexandria with Aya, assisting her in her efforts to locate Septimius. Aya later recruited two Roman senators, Marcus Junius Brutus and Gaius Cassius Longinus, who shared similar goals with them. Having located both Caesar and Septimius' whereabouts, Phoxidas and the Hidden Ones later regrouped in the hideout beneath the Library of Alexandria, making preparations to sail to Rome to combat the Order there.[7]

By 46 BCE, Phoxidas and Aya had sailed to the Tyrrhenian Sea. Along the journey, the fleet came under attack by the Romans. Later, with the assistance of Brutus and Cassius, they were able to defeat the Romans and dock safely in Antium.[8]

Life as a Hidden One

In 30 BCE after Cleopatra's suicide, Phoxidas reunited with Aya, who was now known as Amunet, in his ship docked at the Lighthouse of Alexandria. When Amunet returned with an unconscious Caesarion, they set sail for Rome.[9]

Phoxidas was a highly eccentric and unapologetic man, so much so that nobody accepted him for who he was except his nautai, claiming that he left his wife and children for this reason. Despite this, he was a loyal friend and a man who would do anything for freedom, even joining the Hidden Ones.[4]

Phoxidas is a character introduced in the 2017 video game of Assassin's Creed: Origins, where he was voiced by Robbie Stevens.

In Origins' storyboard phase, developers intended Phoxidas to die and give the command of his ship and crew to Aya.[10] It is unclear whether this was supposed to happen in the memory "Ambush At Sea" or "Fall of an Empire, Rise of Another". 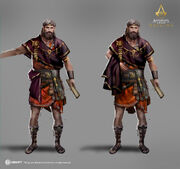 Aya and Phoxidas on his ship