"The phantom blade. A modest little update from the traditional Assassin's Blade. Where you're going, you may not wish to get too close to your enemies."
―Honoré Mirabeau to Arno, 1791[src]-[m]

The Phantom Blade is a modification to the Hidden Blade which consists of a miniaturized crossbow attached to the gauntlet. Pioneered and utilized by the French Brotherhood of Assassins, the projectile mechanism complements the Hidden Blade by providing the user with the ability to assassinate at range.

Essentially a ranged counterpart to the Hidden Blade, the Phantom Blade is reminiscent to a crossbow which has been scaled down to fit underneath a wrist bracer. The assembly consists of a chamber within where the bolts are loaded and a retractable bow analogous to the prod of a crossbow. The limbs of the prod are connected to a central wheel around which they pivot and fold downward to maintain the device's inconspicuous appearance when not in use. Upon activation of the trigger mechanism, these limbs spring outward to instantly form a functional bow.[1]

The Phantom Blade launches darts which are as deadly as bolts. Although it does not have the range of a pistol, the firing mechanism is virtually silent and unerringly swift. With the keen marksmanship of a fully trained Assassin, it can deliver instant death all the same while keeping the Assassin incognito.[1] In this respect, it is much more viable for stealth operations than the earlier Hidden Gun used during the Renaissance which took longer to aim, fire, and reload as well as producing an audible bang.[1][2]

The standard Phantom Blade serviced to French Assassins during the late 18th century carried only one bolt at a time, but it could be upgraded to hold two bolts per round. A variation of the Phantom Blade called the Berserk Blade loaded berserk darts instead and could be fit on the gauntlet alongside the Phantom Blade.[1]

An early prototype of the Phantom Blade was the Hidden Bolt designed by Leonardo da Vinci for the Italian Assassin apprentice Francesco Vecellio at some point between 1501 to 1503. Because the Master Assassin Ezio Auditore deemed him unready to handle the Hidden Gun, Francesco had to ask Leonardo to invent a safer and stealthier alternative.[3]

By the late 18th century, the concept of a miniaturized wrist crossbow had evolved into the Phantom Blade and become standard for the Parisian Brotherhood.[1] On 5 January 1791,[4] Arno Dorian received his first Phantom Blade from Mentor Honoré Mirabeau in recognition of his successful assassination of the Templar agent Charles Gabriel Sivert.[5] Over the course of the French Revolution, he made frequent use of it in his missions, as did those agents who accompanied him.[1] After October 1792,[6][7] he had it upgraded with a supplementary berserk bolt launcher and to hold an additional bolt.[8]

The Phantom Blade debuted in the 2014 video game Assassin's Creed: Unity as the new variant of the Hidden Blade. It functions as the principal ranged assassination tool, allowing players, who play as Arno Dorian, to conduct low-profile assassinations from afar.

Players first receive it in the memory "The Kingdom of Beggars" of sequence 4. Initially, it can only fire one bolt before needing to be reloaded, but the skill Improved Phantom Blade can be purchased with Sync Points after sequence 9 to upgrade the weapon. With this skill, the player can fire two bolts before needing to reload; they also unlock the Berserk Blade.

The Improved Phantom Blade upgrade does not expand the player's ammunition capacity for the weapon, which is dependent on the bracer they have equipped (but not on the belt, which determines the ammo capacity for all other tools). The starting bracer, Arno's Original Bracers, nominally only allows room for 5 bolts, and this sets the maximum number that can be purchased from stores at one time. However, this number is actually the amount Arno can carry on his person prior to loading the Phantom Blade. Therefore, by loading one bolt into the Phantom Blade, he creates space for an additional bolt to be purchased from the store. The default number of bolts a player can carry is therefore 6 and not 5 as the game's interface would indicate.

The Improved Phantom Blade upgrade does not double this capacity to 12 bolts since it only doubles the loading space of the weapon's chamber. With the basic bracer and this upgrade, the maximum bolts a player can carry is therefore 7: 5 on Arno's person, 2 loaded into the launcher. The way to expand the ammo capacity for the Phantom Blade, as well as the Berserk Blade, is to use certain higher-level bracers. This ranges from a non-upgraded Handmade Napoleonic Bracer, which provides only 1 additional Phantom Blade bolt, to an upgraded Legendary Military Bracer, which provides an additional 7 Phantom Blade bolts for a total of 14 bolts, alongside 7 additional Berserk Blade bolts. Not every high-level bracer provides a bonus to this capacity however: the Prowler, Sans-culottes Bracer, Napoleonic, Brigand, and Military lines do, but the Medieval, Phantom, and Musketeer lines do not.

Concept art for the Phantom Blade

Promotional art of the Phantom Blade being used by Arno

Life-sized replica of the Phantom Blade 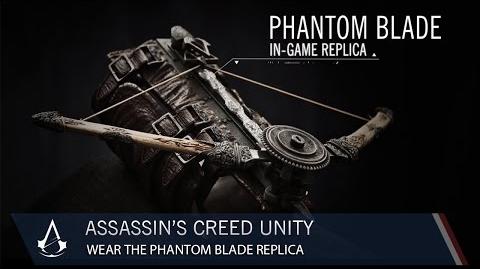