Phanos the Younger was an actor and playwright active in Alexandria during the reign of Ptolemy XIII, and one of the first members of the Hidden Ones, the organization that would later transform into the Assassin Brotherhood.

A cousin of Aya, one of the Hidden Ones' founders, Phanos became a key ally to her and her husband Bayek during their struggle against the Order of the Ancients.

In 49 BCE, Aya's son Khemu was killed by the Order of the Ancients beneath the Temple of Amun in Siwa. Returning to Alexandria and trying to cope with her grief, Phanos brought her to the Library of Alexandria, where Aya educated herself, learning a variety of languages, philosophy, mathematics and ancient history. Unbeknownst to Phanos, however, Aya was also secretly finding ways to seek revenge against the Order, who was also based in Alexandria.[1]

A year later in 48 BCE, Aya was being pursued by Gennadios, the Phylakitai of Alexandria for the killing of both Order members Actaeon and Ktesos. As such, Phanos introduced Aya to Apollodorus, a follower of Queen Cleopatra who gave Aya a place to take regfuge. Aya's husband and Medjay, Bayek of Siwa, later came to the city in search of his love. In the library, Phanos introduced himself to Bayek, giving him the details about Aya's situation. He later escorted Bayek to a small tower, containing a well which provided an entrance to Aya's hideout. Before leaving, Phanos invited Bayek to look for him after reuniting with Aya.[2]

Shortly therefater, Phanos composed a comedic play which took a jab on the reign of the Ptolemies. As a result, Phanos' pay was confiscated by the Gennadios' phylakitai and his actors were imprisoned in the Akra Garrison. Phanos, refusing to be oppressed, attempted to rally the Alexandrians to rebel against the Ptolemies. This caught the attention of Bayek, who helped Phanos to rescue his actors and retrieve his script, allowing him to resume his play.[3]

To celebrate the launch of his play, Phanos chose Bayek as his guest of honor, inviting him to his home located south of the city. Along the journey, Phanos and Bayek were attacked by the phylakitais as retaliation for Bayek's actions at the Akra Garrison. Both of them later repelled waves of attacks outside Phanos home, leading Phanos to come up with a plan to eliminate Gennadios' phylakitai once and for all.[4]

Sometime later, Bayek returned to Phanos, who had managed to discover the whereabouts of Gennadios' remaining Phylakitai: one patrolling the canals beneath Alexandria, another along the Canopic way and the last stationed at the city's armory. Bayek later helped Phanos to eliminate the remaining Phylakitai, thus allowing the Alexandrian poets to spread their revolution.[5]

In 47 BCE, shortly after the Battle of the Nile, Cleopatra was crowned sole pharaoh of Egypt after the defeat and death of her younger brother Ptolemy XIII, allying with the Roman statesman Julius Caesar and seemingly the Order of the Ancients. Phanos met with Aya and Bayek in a tavern alongside with their associates, where the expressed their disgust for Cleopatra's betrayal. Phanos and the rest of the group agreed to form an organization to combat against the Order of the Ancients and preserve the free will of the people, thus becoming one of the first members of the Hidden Ones.[6]

Phanos the Younger is a character in Assassin's Creed: Origins. He is voiced by Canadian actor Arthur Holden. 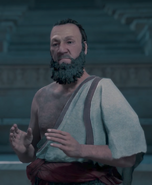 Phanos and others in the tavern with Bayek