Perseus was the legendary founder of Mycenae and the Perseid dynasty, revered by the Greeks as one of their greatest heroes, before Herakles. He was notably famed for the slaying of the gorgon Medusa.

He was the son of Danae and the grandson of King Akrisios of Argos. Through his father Zeus he was a demi-god and the half-brother of Herakles as well as his great-grandfather. Perseus married Andromeda, with whom he sired sons and daughters, among them Gorgophone.

Perseus was born as a result of King Akrisios trying to prevent a prophecy that foretold he would be slain by his own grandson. Akrisios locked Danae, his only child, in a room of bronze, but this did not hinder the god Zeus, who visited Danae in the form of golden rain.[1]

When Perseus was born, Akrisios shut him and his mother in a wooden crate and had them cast into the sea. Instead of dying, the two were saved by the fisherman Diktys. He took them under his wing, raising Perseus on the island of Seriphos. He taught Perseus to fish, hunt, and ride.[1]

The island was ruled by Diktys' brother, Polydektes. He wanted to marry Danae, but Perseus was opposed to this. In response, Polydektes ordered Perseus to slay the gorgon Medusa, and bring her head to him.[1]

To aid Perseus in this quest, Zeus ordered the messenger of gods Hermes to give Perseus a shining sickle,[2] as well as winged sandals, and the goddess Athena to give him a mirror-bright shield. Equipped with these Perseus was able to engage and defeat the gorgon without falling prey to her petrifying gaze. Following her death, the Pegasos sprung forth, and he accompanied Perseus on his way home.[1]

During their journey, they came upon the maiden Andromeda, a princess of Aithopia chained to the cliffs as a sacrifice to the sea monster Ketos. Perseus saved the maiden, and married her.[1]

Perseus returned to Seriphos and showed King Polydektes the gorgon's head, turning the king into stone. Afterwards, he traveled Argos, where he participated in Olympic Games. He hurled the discus, which flew so that it struck the spectating King Akrisios, fulfilling the Oracle's prophecy.[1]

Eventually Perseus settled down to found and rule Mycenae with Andromeda, producing seven sons and two daughters, called the Perseids.[1] Among them was Gorgophone, the future queen of both Sparta and Messenia.[3] The name of the city was allegedly from either the cap of his sword scabbard – called mycēs in Greek or a mushroom – also called mycēs – from which a parched Perseus drank water from.[4]

At some point, Perseus buried the head of Medusa, and it was later discovered in a mound of earth near Argos' agora.[5]

The stories of Perseus' adventures lived long past his own time, as did relics claimed to have belonged to Perseus. In the 5th century BCE there was a crown which was alleged to have been his, as well as a sword. Both of these were eventually found by the Spartan misthios Kassandra during the Peloponnesian War.[6]

In the Temple of Dionysos Kolonatas, in Sparta, Lakonia, a number of the relics linked to Perseus were housed. These included the sickle of Hermes, the Gorgon shield, a fishnet, wooden debris from the crate Perseus and Danae were shut in, and the discus. Kassandra was also tasked by Damia to tell the tale to her children Danae and Kristos.[1]

During the 1st century BCE, a sword sword modeled after the harpe which belonged to Perseus was obtained by the Medjay Bayek of Siwa.[7]

In 2012, Clay Kaczmarek included Perseus in a set of puzzles he'd hidden within the Animus for his follower to find. In Clay's puzzles it was suggested that the 'shining sickle' Perseus wielded was actually a Sword of Eden.[2]

In a simulation of the Underworld created by the Isu Aletheia, Perseus was one of the four champions Hades tasked the Spartan misthios Kassandra to replace Cerberos as a guardian of the Underworld. Tracking him to a recreation of the Gorgon's lair, Kassandra engaged him in combat and bested him. Perseus then agreed to go and protect the Gate of the Slayer.[8]

In the simulation of the Underworld, Perseus was shocked and confused at being sent there instead of Elysium, the afterlife of Heroes. He lamented to his father, Zeus, wondering if he had been too prideful in life. After time, he expressed doubts about killing the gorgon, due to the likelihood of spending eternity in a recreation of its lair, and he pondered if the creature was misunderstood.[9]

However, his disillusion directed to his father turned to anger, and when Kassandra came to recruit him he attacked her. After she asked her his help, he replied that "[his] help must be earned." After accepting defeat, Perseus came to his senses and carried out Hades' will.[8]

In the simulation of the Underworld, Perseus had several types of technology Isu like the Sandals of Hermes, which gave him the ability to run at superhuman speeds and the Helmet of Hades, which made him invisible to the eyes of the enemy. He also demonstrated a great resistance to physical attacks, resisting even the most severe attacks of Kassandra. He could also invoke bursts of energy from above the air while levitating. He was also shown wearing a variant of the Greek Heroes Set of armor.[8] Historically, Perseus possessed his personal harpe which was also a Sword of Eden,[2] however in the simulation he instead wielded the Cursed Gorgoneion.[8]

Perseus (Περσεύς) is an Ancient Greek name possibly derived from πέρθειν (pérthein) "to waste, ravage, sack, destroy" and the –eus suffix is typically used to form an agent noun, in this case from the aorist stem, pers-. Pers-eus therefore means "sacker of cities".

The mural depicting Perseus and Medusa in Assassin's Creed: Odyssey is based on a painting on a hydria from the 6th century BCE. 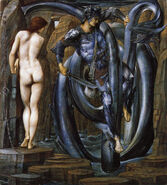 The Doom Fulfilled by Edward Burne-Jones 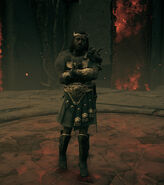 Perseus in the simulation of the Underworld 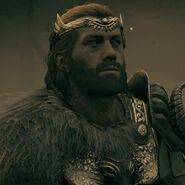 Close up of Perseus

Perseus at the Gate of the Slayer