View source
watch 02:59
Metroid Dread - The Loop
Do you like this video?
Play Sound

In Greek mythology, Pegasos sprung forth along with his brother Chrysaor from the neck of the gorgon Medusa after the legendary hero Perseus had cut off her head. The steed befriended Perseus, and carried him to save Andromeda, an Aithiopian princess, who was chained to cliffs as a sacrifice to the sea monster Ketos.[1]

According to the stories, the legendary hero Bellerophon, son of King Glaukos of Korinth caught Pegasos when the steed came to the Spring of Peirene to drink.[2]

One of the many deeds Pegasos and Bellerophon are famed for is the slaying of the mythical beast Chimera. Another is when the god Zeus tasked Pegasos to bring lightning and thunder from Olympos; as a reward for doing this, the steed was turned into a constellation.[3]

By the 5th century BCE Korinthia had taken the image of Pegasos as their national emblem, which was emblazoned on their banners.[4] Korinthia had also a region dedicated to the steed, called Valley of the Pegasos.[5]

During the Peloponnesian War the Spartan misthios Kassandra found a figurehead for the ship Adrestia bearing the likeness of Pegasos within the Olympic Shipwreck, off the coast of Elis. She also found sails and finery bearing a depiction of the steed in Hermit's Dive in Messara. In addition, she also obtained an armor set which drew inspiration from the winged stallion.[5]

In the 1st century BCE a wealthy merchant's daughter, Kara, named her beloved horse Pegasus in honor of the mythical creature. Unlike Pegasos of myth, Kara's steed was mare.[6]

In Assassin's Creed: Odyssey, one of the lieutenants recruitable aboard the Adrestia via the Animus mods is called Pegasos. Another Animus mod also enables the player character, the Eagle Bearer, to ride Pegasos. 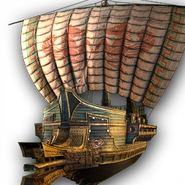 The ship design bearing the likeness of Pegasos 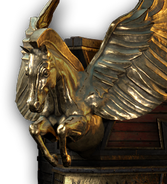 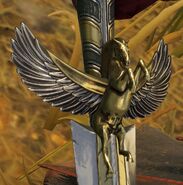 The crossguard of the sword Chrysaor featuring the likeness of Pegasos

The banner of Korinthia featuring Pegasos 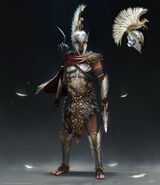