Paul Bellamy was a member of the Assassin Brotherhood in the United States, and the director of an Assassin training camp located near the city of Philadelphia.

Bellamy was notably involved in the introduction of the Templar sleeper agent Daniel Cross to the Assassins in 1998. After Cross killed the Mentor and the Templars initiated the Great Purge, Bellamy aided in the evacuation of his training camp, but was ultimately captured and was forced into an Animus at Abstergo Industries.

"Are you having another vision? Daniel, you've got to tell me what it is you're seeing. Open up to us, let it all out–"
―Paul to Daniel Cross.[src]

In 1998, Hannah Mueller - an Assassin from Paul's camp - returned with a man named Daniel Cross, who she had discovered while out in the city, and had presumed to be an Assassin like herself. While the drunken Daniel slept, Paul and his fellow Assassins checked for records of him, but could find none in their camp, or any other camp.

The following morning, Hannah brought Daniel to meet Paul, who began asking where he had received his training, and what his responsibilities as an Assassin were. Daniel, however, was confused about the situation he was in, and could not provide any answers.

Paul asked Daniel to show them his arm, where he had a tattoo of the Assassin insignia - though Daniel was not aware of what the symbol meant, saying it only "looked cool" and "felt right." Showing Daniel his ring with the Assassin insignia, Paul asked him once again about his identity, at which point Daniel experienced a vision from the past.

As Daniel relived the genetic memories of his ancestor, Nikolai Orelov, Paul recognized the language he was speaking as Russian, and caught him mentioning "Tunguska". Paul asked Daniel about the visions, and knew he was somehow connected to the Assassin Order, though Daniel showed no evidence of knowing the Order even existed.

Daniel, unsettled by his continued hallucinations, chose not to cooperate, and stormed off to leave the camp. As two Assassins tried to stop him, Daniel attacked them both, managing to incapacitate them easily. However, Paul pulled him off and held his Hidden Blade to Daniel's throat, effectively subduing him.

As Daniel was incarcerated in one of the camp's cabins, Paul proceeded to contact William Miles,[1] a fellow Assassin in charge of an Assassin compound located in the Black Hills of South Dakota.[2] He asked for information about Tunguska, and William managed to find out that a team of Assassins had been sent there in 1908 to retrieve a Staff of Eden, but only one of them had survived: Nikolai Orelov, Daniel's great-grandfather.

Paul realized that Daniel's genetic memories were the only link they had to the location of the Staff, and he went to speak to him. However, he found that both he and Hannah had left the camp, and Paul was forced to track them down to Daniel's apartment.

Though he reprimanded Hannah for defying his orders, Paul's attention quickly turned to Daniel. He spoke gently to Daniel that he wasn't safe in his apartment, and that he had to tell them what had happened to his great-grandfather. However, at the mention of Nikolai's name, Daniel experienced yet another vision. Momentarily losing sense of who he was, Daniel punched Paul, and fled out the window onto the fire escape. Paul demanded for Hannah to stop him before he killed himself.

Paul and Hannah chased Daniel across the rooftops until he collapsed, overwhelmed by the memories. As Hannah supported him, Daniel revealed that he had finally realized his purpose - to find the Mentor of the Assassin Order.[1]

"That bastard's been to every training camp we have, all over the world! They know where we are!"
―Paul after hearing news of Daniel's betrayal.[src]

For two years, until 2000, Daniel and Hannah embarked on a journey to gain the support of the other Assassins around the globe, and to find the Mentor. Finally, Daniel's efforts came to fruition, and he was taken to the Mentor's Dubai residence.

However, upon receiving the Mentor's praise and Hidden Blade, Daniel acted on an impulse implanted into his brain by Abstergo Industries during his youth - to assassinate the Mentor - and revealed himself to be a Templar sleeper agent. With the Mentor's death, Daniel fled to Abstergo's Philadelphia facility, and was interrogated under chemical sedation into giving them the location of all the Assassin camps he had visited. As news of the incoming Templar crackdown spread, Paul began organizing the immediate evacuation of his camp.[3]

However, he was nonetheless captured within the next fourteen months. Abstergo induced Bellamy alongside other subjects into a coma and bound him to an Animus in the company's Philadelphia facility, where they explored the genetic memory of his ancestors.[4]

Hannah: "Paul! I... We were... I was bringing him back... We came here for his medication..."
Paul: "I don't want to hear it, Hannah. How dare you defy my authority? You endanger all of us."
―Hannah and Paul in Daniel's apartment.[src]

Paul was a reserved and polite man, who clearly knew his responsibilities to his fellow Assassins. In respect of the third tenet of the Creed, he was angered when Hannah left the camp with Daniel, who he saw to be a potential threat to the Order.

He was adept with the Hidden Blade, and possessed at least a modicum of freerunning skill.[1] However, Paul's duties mainly involved the administration and protection of the Assassins at his camp, a responsibility he took seriously. Upon the revelation of the assassination of the Mentor, Paul kept his calm in the panic, and immediately ordered an evacuation.[3] 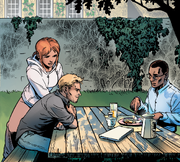 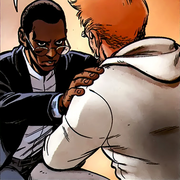 Retrieved from "https://assassinscreed.fandom.com/wiki/Paul_Bellamy?oldid=843003"
Community content is available under CC-BY-SA unless otherwise noted.