The Papacy is the office of the Pope, who is the Bishop of Rome and the leader of the Catholic Church. The Pope was considered the head of the Catholic Church in terms of spiritual matters, and issues letters and Papal Bulls to mediate crises or theological arguments. For centuries, the Papacy possessed the power to order military expeditions, the most significant of which were the Crusades during the Middle Ages. In succeeding generations, the Papacy's temporal power and influence grew with the spread of Catholicism.

During the Renaissance, the Papacy ruled large portions of central Italy, with its capital in Rome. The Pope was also nominally in control of the assets of the Church; however, the management of the Church's income was left to the cardinals. The Papacy was also protected by personal guards, also referred to as the Swiss Guard.

The Pope, in early times, was a mediator between the growing factions of the Church and decided over temporal and spiritual disputes. The leaders of the Church during that time took on the title of the Bishop of Rome. These early popes guided the people in proper doctrine and helped persecuted Christians hide from their oppressors. [1]

However, with the Edict of Milan in 313, Christianity came out of the underground, became officially sanctioned, and spread across the far-flung territories of the Roman Empire. When the Church split into East and West in 1054, the Pope lost influence in the East, but gained far more political influence in the West. The original Papal Staff, once carried by Saint Peter, was in fact a Piece of Eden. It was passed down from Pope to Pope, until December 1499, when it was lost.[2]

With autonomy in 380, succeeding popes became increasingly powerful. Outpourings of religious piety were common due to the professed ideals of knighthood, and consequently the Church found itself with a large army of devout warriors at its disposal. At the end of the 11th century, the Papacy effectively utilized this army by declaring a crusade to take back the Holy Land from the Muslims.[1]

This First Crusade was successful in capturing Jerusalem and other vital cities in the Levant, and it was followed up by the Second Crusade as a response to the fall of the Crusader city of Edessa. The failure of the Second Crusade led to a temporary peace, which lasted until Saladin conquered Jerusalem. In response, Pope Gregory VIII called for a Third Crusade, the objective of which was to reclaim Jerusalem and Solomon's Temple. The Templars, known as the Knights Templar at the time, actively participated in this Crusade – though only for their own personal gain – and found an Apple hidden in Solomon's Temple, before they attempted to destroy the Assassin Order.[3]

The Assassins sought to counter their efforts, and Altaïr Ibn-La'Ahad was able to prevent the Templars from gaining possession of the Apple. He successfully kept Robert de Sable and his Templar followers from creating a union between King Richard and Saladin, to begin a war against the Assassin Order.[3] After the Crusades, Pope Clement V was manipulated by King Philip IV of France – who in turn had been coerced by the French Assassins – to disband the Knights Templar on the charges of heresy.[4]

The Papacy, even after the failure of the Crusades, continued to maintain its power during the Renaissance. They sponsored lavish constructions and works of religious art as patrons of artists such as Leonardo da Vinci, Michelangelo and Raphael. In 1471, Sixtus IV ascended to the position of Pope and continued the work of his predecessors, but he also practiced nepotism and appointed four nephews, one of which was Giuliano della Rovere, to powerful positions in the Church. Sixtus was best known for his involvement in, and supporting, the Pazzi Conspiracy to assassinate Giuliano de' Medici and Lorenzo de' Medici.[2]

On his death, two candidates presented themselves: Rodrigo Borgia and Giuliano della Rovere. The cardinals, who were alleged to have been bought by Rodrigo, nominated him to be Pope, and he took the name of Alexander VI. As Pope, Rodrigo gained access to the Papal Staff, a Piece of Eden. With it, he learned the location of the Vault underneath the Sistine Chapel. [2]

However, the Assassin Ezio Auditore was able to prevent him from entering the Vault and instead went in himself, where he received a message from the First Civilization member Minerva. Upon exiting the Vault, Rodrigo had vanished, though the Staff still resided where it was placed. Though Ezio tried to lift it from the floor, the Staff disappeared into the ground and only resurfaced years later as the sceptre of the Russian Tsars.[5] Ezio, along with his uncle Mario Auditore, then left the building and returned to Monteriggioni.[2]

Alexander VI too made several nepotistic appointments, including appointing his own son, Cesare Borgia, as a cardinal, though Cesare quit to continue the bloodline after his brother died, in order to become the Captain-General of the Papal Armies. Rodrigo and Cesare ordered the closure of many merchants and stables and allowed the condition of many Roman landmarks to deteriorate. They also took choice areas of land and built Borgia Towers to terrorize the populace and ensure their control of Rome.[6]

Following this, Cesare also undertook several military conquests in the name of his father, the most important of which was the Siege of Monteriggioni, where Cesare stole the Apple from Mario Auditore before killing him, and invited Ezio himself to follow him to Rome. Cesare, through his father's influence, forced Leonardo da Vinci to design war machines for the Borgia cause.[6]

However, after Rodrigo's death at his own son's hands, Giuliano della Rovere was elected to the Papacy and took the name Julius II. He ordered the arrest of Cesare, who was incarcerated at the Castel Sant'Angelo and later the Castillo de la Mota in Spain.[7] As well as this, Julius and his successor, Leo X, both supported the Assassins' cause.[8] 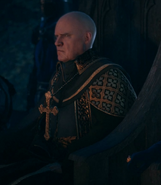 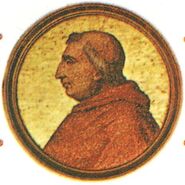 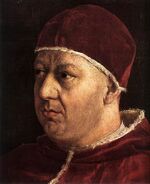 Retrieved from "https://assassinscreed.fandom.com/wiki/Papacy?oldid=857371"
Community content is available under CC-BY-SA unless otherwise noted.