Palenque was a Maya city state in southern Mexico that flourished in the 7th century.

After its abandonment in the 8th century, the city became overgrown with vegetation and was left in a state of near ruin. Palenque was popular among explorers, who wished to excavate its tombs and temples. The city also rumored to be linked with the El Dorado myth.

In 2013, Palenque was used as a simulated location created by Abstergo Industries' entertainment branch, for the console stage of their Animus technology.

The simulation depicted Palenque as an old Mayan site, deserted and its buildings in ruin. The temple structures itself were all intact, but with signs of antiquity. Near the complex of temple buildings a camp was established where tents were set up, serving as covering for certain goods. Adjacent to both the camp and the temple site was a jungle area. The structures located in the jungle were overgrown with vegetation and most of them lay in ruin.

With the implementation of new technology, simulated locations in the console stage were upgraded to have multiple aesthetic variations, as well as dynamic weather. Because of this, Palenque could be utilized during the day, the night, or amidst rain. 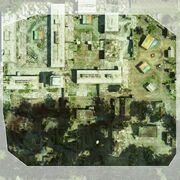 An aerial view of Palenque
Add a photo to this gallery

Retrieved from "https://assassinscreed.fandom.com/wiki/Palenque?oldid=791822"
Community content is available under CC-BY-SA unless otherwise noted.