The Palazzo Ducale (English: Doge's Palace), is a large palace in Venice adjoining the Basilica di San Marco. Built to protect the Doge of Venice, the Palazzo Ducale was an imposing structure with high, unscalable, walls and a guarded main entrance.

The Palazzo Ducale was constructed from 1309 – 1424, in the Gothic style, as the residence for the Doge, or, rather, his prison, since the Doge was rarely allowed to leave once elected.[1]

In 1476, the Assassin Giovanni Auditore da Firenze travelled to the palace following the trails of individuals responsible for the assassination of Galeazzo Maria Sforza. There, he eavesdropped on a meeting between Marco Barbarigo and a courier, who was instructed to deliver a letter to their master in Rome.[2]

In 1485, a Templar plot to gain the allegiance of the current Doge of Venice Giovanni Mocenigo turned to one of assassination, with Carlo Grimaldi chosen to poison the Doge within his own chambers. The Assassins utilized Leonardo da Vinci's Flying Machine in order to gain access into the Palazzo, since the Palazzo was impossible to climb or otherwise penetrate, but the Assassin Ezio Auditore arrived too late to save Doge Mocenigo. Ezio then assassinated Carlo Grimaldi and fled the Palazzo.[3]

Following the death of Giovanni and his successor, Marco Barbarigo, Agostino Barbarigo became Doge and continued to utilize the Palazzo Ducale as his personal residence.[3]

The Palazzo Ducale is intended to be impenetrable without the Flying Machine, but it is possible to get inside without it using glitches. 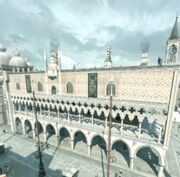 The exterior of the Palazzo from across the Piazzetta

Giovanni Auditore before the Palazzo