"Sailing from the southeast, the pirate ship Palaityros constantly harasses merchant boats and disrupts trade around the world. Put an end to its mischief."
―Description of the ship on the message board[src]

The Palaityros was a great pirate trireme sailing the Aegean Sea with lesser pirate vessels in the 5th century BCE.

During the Peloponnesian War, the Adrestia, commanded by the Spartan misthios Kassandra, engaged the Palaityros and its companions in battle and sank it. Kassandra claimed the sail and finery of Palaityros for her own.[1]

Palaityros, Greek for "Old Tyre", is a former name for Tyre in what is now Lebanon, fitting the ship's description as being "from the southeast". 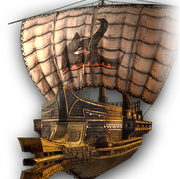 The design of the Palaityros

Retrieved from "https://assassinscreed.fandom.com/wiki/Palaityros?oldid=879119"
Community content is available under CC-BY-SA unless otherwise noted.