Assassin's Creed Wiki
Register
Don't have an account?
Sign In
Advertisement
in: Objects, Jewelry, Order of the Ancients,
and 2 more

Order of the Ancients medallion

An Order of the Ancients medallion,[1] also known as an Image of the Ancients,[2] was a pendant carried by individuals to signify their membership in the Order of the Ancients. The design of the medallion varied across time and among specific rites, but generally could be considered a precursor to the rings and pins used by Templars to identify each other in later centuries.

In the 5th century BCE, the Persian sect of Order of the Ancients carried medallions made of adamant and stamped with a twisted version of the Faravahar. During the Peloponnesian War, the Spartan misthios Kassandra recovered these from the bodies of her targets as she dismantled the Order's power in Greece by eliminating the Order of Hunters in Makedonia,[2] the Order of the Storm in Achaia,[3] and the Order of Dominion in Messenia.[4] She later gave them to an artisan blacksmith at Sargon's Oikos of the Olympians, who melted them down in order to repair The Sword of Kings.[5]

In 8th century CE China during the Tang dynasty, the local branch of the Order referred to themselves as the Golden Turtles, so named for their palm-sized tortoise shell tokens used by government officials who were rank three or higher as a symbol of identification throughout the reign of Empress Regnant Wu Zetian. The badges were often cast in gold, though silver and bronze versions were also cast for ranks four and five, respectively.[6]

In the 9th century, the Anglo-Saxon branch of the Order carried silver medallions engraved with a depiction of Yggdrasil. The Viking shieldmaiden Eivor Varinsdottir of the Raven Clan collected one of the medallions after defeating Kjotve the Cruel in a holmgang before the Raven Clan's assault on his fortress,[1] but when asked about it by the Hidden One Basim Ibn Ishaq, she believed it little more than a trinket to be traded with a merchant.[7]

Upon being told of the medallion's true meaning by Basim's apprentice Hytham, Eivor agreed to help eliminate the Order in England and to bring the medallions to the bureau in Ravensthorpe as proof of her kills.[8] As Eivor delivered Order medallions, Hytham taught her new combat skills, and rewarded her efforts after acquiring every medallion by gifting her with Thor's Cape.[9] 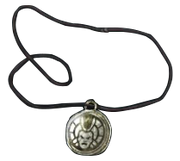 The necklace held by the Persian branch of the Order