The Order of Hunters was a branch of the Persian Order of the Ancients who pursued enemies of the Order; more specifically, they hunted down and eliminated those the Order considered "Tainted Ones".

Sometime before 429 BCE, the Order of Hunters were tasked by Amorges to eliminate Darius, a Persian official who had previously assassinated Xerxes I in 465 BCE.[1]

Led by their Magi Pactyas the Huntsman, the branch hunted Darius across Persia and eventually to Makedonia, Greece in 429 BCE. While within Makedonia, they learned about and began to hunt for the Spartan misthios Kassandra, whom they considered to be a "Tainted One".[1]

Kassandra worked with Darius and his son, Natakas, to eliminate and dismantle the Order's operations in the region.[1]

The Magus is marked with an asterisk. (*) 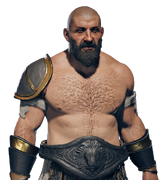