Assassin's Creed Wiki
Register
Don't have an account?
Sign In
Advertisement
in: Article stubs, Order of the Ancients

The Order of Dominion was a branch of the Order of the Ancients in Persia led by Amorges, a former member of the Persian elite.

The Order of Dominion served as the lead branch of the Order for centuries, assisting the Persian Kings in subverting various nations and expanding their power. By the reign of Artaxerxes I of Persia, the branch was led by Amorges, a former member of the Persian elite.[1]

During the Peloponnesian War, they Order took advantage of the conflict between Sparta and Athens and were deployed to Messenia, Greece where they attempted to consolidate power amongst the chaos. After their fellow branches, the Order of Hunters and the Order of the Storm, failed to eliminate Darius, his son Natakas and the misthios Kassandra, Amorges sent the branch to do so. They would manage to kill Natakas, destroy their home in Dyme, and kidnap Elpidios, Natakas and Kassandra's son.[1]

Using the region of Messenia as a stronghold, the Branch conducted their work, allying with the Spartan army against the athenians and buy siege weapons from the Cult of Kosmos. Kassandra and Darius dismantled the Order's operations in Messenia and killed members of the branch, before teaming up with a liberated Athenian general to attack Andania Mine. This would cause enough of a distraction to allow Kassandra and Darius to confront and defeat Amorges. Amorges then revealed the location of Elpidios on an island south of Messenia.[1]

The Magi are marked with an asterisk. (*) 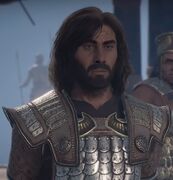