"Respect the blade."
―The Orchid.

The Orchid (harvested from: Jing Lang) was an Animi Avatar used by the entertainment branch of Abstergo Industries, as part of their plan to influence the general public, via the console stage of the Animus technology. She was only available through a system update, and wielded a sword as her specialty weapon.

The Orchid had several contextual animations:

Facing her target, the Orchid pulls out her sword and strikes them in the forehead with its hilt. She then takes advantage of their defenselessness by piercing her victim's stomach with her blade and withdrawing it quickly, watching them crumple to the floor, dead.

Behind her target, the Orchid draws her sword, before slashing it horizontally across their spine, causing them to go weak at the knees. She then follows through with her attack by wedging her blade into the right of her victim's abdomen, and proceeds to free her sword by forcing her victim forwards with her foot, the weapon slashing through their side along the way.

Facing her target, the Orchid pulls out her sword and slashes them across the stomach in one fluid motion, which causes them to kneel forward from the sudden pain. Using this to her advantage, she embeds the blade downwards into her victim's throat and rips it back out, causing them to fall forward and choke on their own blood.

Surprising her target from behind, the Orchid thrusts her sword into their back, before slowly and painfully forcing the blade through until it fully penetrates them, the hilt adjacent to their body. As her victim stares down at the blade, the Orchid roughly pulls it free, with them collapsing dead to the ground shortly afterward.

Approaching her target from the front, the Orchid hastily unleashes her sword from its scabbard and slashes her target in an upwards arc. With the force of the strike spinning them away from her, the Orchid then takes the opportunity to fluidly turn and embed her weapon into their abdomen from behind, before cleanly removing her sword and storing it away as her victim falls to their knees.

Sprinting over to her target, the Orchid suddenly vaults around them with her sword drawn, before pressing her weapon into their neck and slitting their throat as she pulls them with her. Once her feet touch the ground, she quickly removes her sword from her victim's neck, causing them to twirl around to their death.

Leaping onto her target from above, the Orchid removes her sword in mid-air. When she lands, she forces them onto their back and impales her victim in their heart with her sword, before standing and leaving their motionless corpse on the ground.

Grabbing her seated target's foot, the Orchid drags them off the bench until their head rests against it. Before her victim can do anything to defend themselves, she forcefully kicks them in the face, violently sending their head backwards and breaking her target's neck on the bench behind them.

The Orchid could be customized in several ways:

Promotional art of the Orchid

Concept art of the Orchid 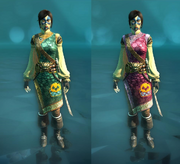 Alternative costumes for the Orchid

Pirate, Warrior and Emperor's Advisor costumes for the Orchid 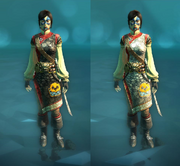 Templar and Assassin costumes for the Orchid 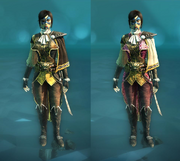 Mastermind and Prestige costumes for the Orchid 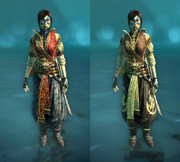 Dragon's Mouth and Imperial Tigress costumes for the Orchid

The Orchid advancing on the Navigator

The Orchid, along with the Jaguar and Blackbeard