The Old Fort of Nassau was a large fortified position on the island of New Providence in the Bahamas, situated just uphill from the town of Nassau. From its perch on the cliff, the fort could overlook both of the town's harbors as well as the surrounding ocean, making it a perfect location from which to defend the island.

In the early 18th century, piracy grew rampant on the island, and it became a haven for captains such as Benjamin Hornigold, Edward Thatch, Mary Read, and Edward Kenway, among others. When the pirates set up their own government on the island, they took the fort as their own, making it their base of operations. However, King George I sent reinforcements in 1715, and the British were able to reclaim the fort, which was beginning to fall into disrepair.

Eventually, the Templar Woodes Rogers, recently-appointed Governor of the Bahamas, arrived on the island in 1718, presenting an ultimatum to the pirates: accept full pardons and return to England, or face execution. While presenting this deal, he met with the pirate leaders in the fort, where Edward Kenway infiltrated and eavesdropped on the meeting. 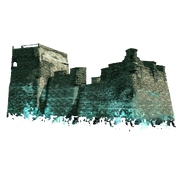 Retrieved from "https://assassinscreed.fandom.com/wiki/Old_Fort_of_Nassau?oldid=791670"
Community content is available under CC-BY-SA unless otherwise noted.