Assassin's Creed Wiki
Register
Don't have an account?
Sign In
Advertisement
in: Articles in need of sources, Individuals, Greeks,
and 3 more

Odysseus was a legendary Greek king of Ithaka and the hero of Homer's epic poem, the Odyssey.[1] The husband of Penelope, he is well renowned as the hero who helped end the Trojan War.

As King of Ithaka, Odysseus owned a palace on the island. When the Trojan War broke out, Odysseus left the palace to his son's supervision[2] and departed for Troy. During the 10-year-old war, Odysseus became a major player, creating the Trojan Horse which helped the Greeks to win the battle. During his return trip that took ten years, Odysseus experienced numerous adventures, among them defeating the Cyclops Polyphemos, and eluding the monstrous creatures Skylla and Charybdis.[3]

When he finally return to the island, he was received by his swineherd Eumaios, who aided him in slaughtering all the suitors of Penelope.[4] While at the goat farm, Odysseus met the goddess Athena, who provided him with a disguise to aid him in killing the suitors.[5] With Eumaios, Odysseus slew [citation needed] his disloyal goatherd Melanthios, who had mistaken Odysseus for a beggar when he returned, and struck him. While Odysseus had been away at war, Melanthios betrayed him and attempted to impress Penelope's suitors. Odysseus also visited the Cave of the Nymphs after his return.[4]

While in Ithaka in 431 BCE, the Spartan misthios Kassandra encountered a woman named Odessa, who claimed descent from Odysseus. In addition, she also recovered a set of armor allegedly belonging to Odysseus, as well as Penelope's Shroud.[4]

Odysseus and his crew facing the sirens 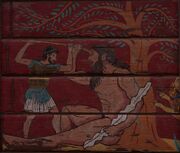