"All your efforts to evade destiny will only fling you further along its course. If you're not careful, you may be the author of your own destruction."
―Loki, to Odin.[src]-[m]

Odin, also called the All-Father by worshippers and Havi by the Æsir, was an Isu who became a widely revered god in both Norse and Germanic mythology.

The leader of a group of Scandinavian Isu called the Æsir, he was known in Norse mythology as the king of all gods, associated with wisdom, healing, death, knowledge, and war. Along with being the original owner of the spear Gungnir, he was also the father of Heimdall, Baldr, and Thor, the warrior god of lightning and thunder.

Odin, also referred to as Havi in Old Norse, meaning "High One", has numerous appellations.[1] Pagan Anglo-Saxons and Gaels referred to him as Woden or Wodin in Old English and Old Gaelic, respectively,[2] while the ancient Fomorian being called Balor knew him as Fjölnir.[3] Among his other epithets he is called The Hanged-God, Shield-Shaker, Graybeard, the Mad One, and Wanderer.[4] Andhrímnir referred to him as Lore-Keeper.[5]

Odin was the son of Borr and the jötunn Bestla, and with the help of his brothers Vili and Vé, the killed the proto-being Ymir and gained control over Asgard.[6] At a later date, Odin became the single leader of the Æsir, a group of Asgardian Isu towards the end of the First Civilization. He was married to the Vanir Freyja but, while the pair developed a great respect for each other, their union was largely a political move.[7]

Warned by the Nornir that the calculations predicted that Fenrir, the illegitimate son of Loki and Angrboða, was to be the death of him at the onset of the Great Catastrophe,[1] Odin had him imprisoned for life.[8]

Outraged at the treatment of his child, Loki secretly murdered Odin's son Baldr by poisoning his food with mistletoe berries. Odin stood over his son and grieved while Loki watched from afar. After learning who was responsible, Odin ordered Loki be apprehended to answer for his crimes.[9]

Afterwards, Odin met with Hyrrokin, the Mother of Wisdom among the Capitoline Triad, who revealed to him that she, Suttungr, and Gunnlöð were working on the supercomputer Yggdrasil as a seventh method of salvation to avoid the cataclysm, similar to an earlier attempt where their species' DNA would be uploaded into humanity's genome. Odin then began searching for a way to resurrect his son.[9]

At some point in his life, Odin met and fought Balor, though the old god was not killed in the ensuing battle.[3]

When the Great Catastrophe came, Odin summoned his trusted eight to his secret chamber and uploaded themselves. He stated that none could follow them, especially Loki. He broke his mask and led the eight to face their end. Millennia later, Odin was reincarnated as the Viking shieldmaiden Eivor Varinsdottir of the Raven Clan.[9]

According to the mythology, Odin was accompanied by the ravens Huginn and Muninn, who kept him informed of the goings-on in the worlds.[10]

Odin was also in charge of the sword-maidens, who were thought to visit battlefields.[11]

At some point, Odin disguised himself as a beggar and plunged a sword into a tree called Barnstokkr, stating that whoever was able to pull it free would receive it as a gift. Only the warrior Sigmund proved able to do so, and subsequently claimed the Sword as his own.[12]

It is said that Odin was killed or will be killed by Loki's son, Fenrir, the giant wolf during the final battle of Ragnarök.[13]

During the 9th century, the Vikings made offerings and sacrifices to Odin and prayed for strength in battle.[10] A statue of him was a key feature of Viking settlements.[14]

Odin had a totem named after him in the popular dice game Orlog, played in the 9th century. The piece "Odin's Sacrifice" would allow players to sacrifice a number of health tokens in order to gain more God Favor. An Anglo-Saxon man in Crawleah, Suthsexe possessed the piece, which he gave to Eivor after being defeated.[15]

Alternative image of Odin in the database 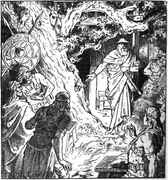 An engraving of Odin revealing the sword to Sigmund