Due to the vast sources of the mineral on the islands of Hydrea and Melos they were known as the Obsidian Islands.[1]

Obsidian was used by farmers and warriors for thousands of years before the introduction of bronze rendered it obsolete.[2]

During the 5th century BCE, the Cyclops of Kephallonia had a prosthetic eye made of obsidian glass. The Spartan misthios Kassandra infiltrated Cyclops' residence and stole the eye on the advice of Markos.[3] Kassandra also used obsidian glass to better her gear.[4]

Obsidian was still used in Egypt during the Ptolemaic Kingdom's reign. As such, the Medjay Bayek of Siwa obtained a bow made out of it.[5]

During the Viking expansion into England, the warrior Eivor found obsidian deposits throughout the land which they used to improve their gear.[6]

During the 18th century, the Assassin Aveline de Grandpré purchased an axe made out of obsidian[7], and around the same time, the pirate Alonzo Batilla procured a Mayan variant of the axe as well as a dagger made of obsidian.[8]

Obsidian was occasionally used at later dates as well. During the Victorian era in late 19th-century London, a kukri was made out of it, and it was also used in the handle of a cane-sword. These both ended eventually in the hands of the British Assassins Evie and Jacob Frye.[9] 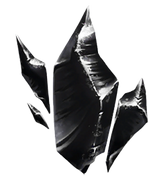 Retrieved from "https://assassinscreed.fandom.com/wiki/Obsidian_glass?oldid=923812"
Community content is available under CC-BY-SA unless otherwise noted.