"Dirty and decrepit. Not quite as I remember. But it has been over 80 millennia."
―Bartholomew Roberts, commenting on the state of the Observatory, 1719.[src]

The Observatory is a hidden First Civilization site in Long Bay, Jamaica. Built to allow the remote viewing of any individual's vision through the use of a Crystal Skull, it was essentially a surveillance center used by the Isu to keep track of certain individuals.

The Observatory operated by placing a vial, containing a drop of blood from the person to be observed, into a Crystal Skull located within an armillary sphere. The device would then project what the person was seeing and hearing into the room. Around the central altar, there were rows of seats that would allow for a large number of people to view the projection at any one time. In the hallway leading to the main viewing chamber, the Observatory was also used to store a large number of vials containing the blood of numerous First Civilization individuals.

The Observatory's skull was not a device that made the user truly omniscient. It could not project a person's experiences without a sample of their blood. Without this, the skull was rendered useless. Blood samples taken from people who were deceased would also not work, for obvious reasons.

If the Crystal Skull was removed, the complex activated a lethal security system, which could only be deactivated, in most circumstances, by a Sage. If left in operation, the system would project energy barriers at regular intervals, strong enough to vaporize humans on contact.[1]

It also caused the interior of the structure to shift and separate into several platforms, in order to make traversal of the complex difficult. During such instances, the only apparent way to deactivate the security system was to return the Crystal Skull to the complex's armillary sphere. In order to ensure the security of the Observatory, indigenous Guardians were tasked by an unknown Sage to protect the structure from encroachers.[1]

Additionally, the main door to the complex could only be opened by inserting a vial containing the blood of a Sage, although the Sage Thomas Kavanagh, Jr. managed to open the door simply by pressing his finger into an opening in the facade.[1]

"There were many stories about this place once. Tales that turned into rumours, and again into legend. The inevitable process of facts becoming fictions, before fading away entirely."
―Bartholomew Roberts, on the legendary status of the complex, 1719.[src]

The Observatory was built more than eighty thousand years ago, in the dense jungle of what would one day become Jamaica. Its construction and operation were overseen by the First Civilization member Aita, who would eventually have his genetic code and memories passed on to the humans who would become Sages, and have the power to use the facility that their predecessor had built.[1]

In 1719, the Observatory was visited by the Sage Bartholomew Roberts and Edward Kenway, a fellow pirate. After neutralizing the Guardians protecting the complex, Edward learned of the Observatory's power - to spy across vast distances - and was sure he'd found the perfect way to earn wealth and conquer the seas.[1]

However, he was betrayed and sealed inside by Roberts, but managed to climb to the Observatory's ceiling and escape via a secondary exit leading to a waterfall near the beach, where he was captured by Roberts, who sold him to the British for the bounty on his head.[1]

The Observatory's projector was rendered inactive once Roberts removed the Crystal Skull from its sphere, but it caused the entire complex to enter into a state of lockdown, that could only be undone if the Skull was returned to the chamber. Three years later, in 1722, Edward once again visited the complex, this time in pursuit of Laureano de Torres y Ayala, Grand Master of the Caribbean Rite of the Templar Order.[1]

With Torres unaware of the complex's state, many of his men died both by Kenway's hand and the Observatory's defenses. Leaping and climbing around the walls and ceiling, Kenway was able to make his way across the chamber, before jumping down to assassinate Torres. Soon after, the Assassins Ah Tabai and Adéwalé, along with Kenway's new quartermaster Anne Bonny, arrived. Ah Tabai returned the Skull to the sphere, calming the Observatory's systems.[1]

The four then decided to seal the Observatory until another Sage appeared. However, by this point the blood vials had been removed, and the Assassins devoted themselves to locating and returning them to their rightful place, in time.[1]

In 2013, it was noted by an Abstergo Entertainment employee that whilst the Observatory's observational facilities were on par with modern-day surveillance techniques, and thus not entirely important to the Templar Order, the location of the blood vials would provide them with an abundance of First Civilization genetic material to work with, and, the employee noted, possibly decode into viewable genetic memory.[1] The following year, Juhani Otso Berg confided in his fellow Templar Violet da Costa that he would be traveling to the region to try to excavate the site.[2]

From 25 to 30 May 2014, Berg oversaw the excavation of the site and concluded that it had been deliberately buried between 200 and 230 years prior, presumably by the Assassins. After unearthing the entrance to the Observatory, he came to suspect that at some point in the 18th century the Observatory suffered a catastrophic collapse, causing most of the facility to be destroyed.[3]

Exterior of the Observatory

Entrance to the Observatory

Walkway leading through the cavern

Blood vials housed in the Observatory

First Civilization symbols inside the Observatory

Entrance to the observation chamber

Overlook of the observation chamber

James Kidd holding a sketch of the armillary sphere

One of the Observatory's chambers

A projection being viewed in the Observatory

A battle in the Observatory's main chamber, with the defense mechanisms active 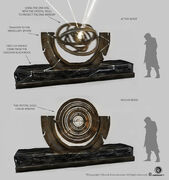