A nymph is a lesser female spirit in the Greek and Roman mythologies.

Usually a nymph is attached to a certain place or terrain. Sometimes they form at least part of the retinue of a god or a goddess, for example Dionysos and Artemis. They can also be found in the company of the Greek god Pan.

In the Greek myths, numerous places were associated with the nymphs. Of special note is the Cave of the Nymphs in Ithaka, which Odysseus visited on his return home, according to Homer's Odyssey,[14] as well as the Cave of Ionides in Elis, which was revered as the dwelling place of a group of water nymphs called Ionides.[12] In Phokis, the village of Lalaia was named after the nymph of the same name,[17] near the spring which bore the name of her father.[18]

During the Peloponnesian War, a woman living alone among pigs, wild boars, and lions on Atoll Point of Paros Island claimed to be one of the Oceanids, introducing herself to the Spartan misthios Kassandra as "Circe of the Oceanids".[16]

In Constantinople, the Great Nymphaeum was built in honor of the nymphs.[19]

Furthermore, Ercole Massimo's family was said to have originated from the union of Herakles and an unnamed nymph. [20] 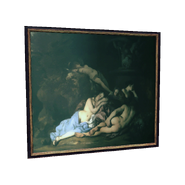 Nymphs by a Fountain, a painting by Peter Lely

A view of the Great Nymphaeum