Assassin's Creed Wiki
Register
Don't have an account?
Sign In
Advertisement
in: Articles that need updating, 1230 births, 1294 deaths,
and 13 more

"Altaïr means us to spread the word of the Assassin, that is his plan. And not just spread the word but set up an Order in the west. Shame on me for taking so long to work it out, but now that I have, all seems clear: to us (specifically to me, it seems), he is entrusting the spirit of the Brotherhood. He is passing the torch to us."
―Niccolò realizing Altaïr's plans, as written in his journal, "The Secret Crusade."[src]

Niccolò Polo (c. 1230 – c. 1294) was a Venetian merchant and explorer, the brother of Maffeo Polo, and the father of Marco Polo. Working with his brother for the majority of his life, they established trading posts in Constantinople, Sudak, and in the western part of the Mongol Empire.

In 1257, Niccolò and Maffeo were inducted into the Assassin Order by the Mentor of the Levantine Brotherhood, Altaïr Ibn-La'Ahad, and his son Darim. Entrusted with Altaïr's Codex and the future of the Assassin Order, the Polo brothers established various Assassins Guilds, like in Constantinople and Venice.

Having lost the Codex to the Mongols in 1257, Niccolò, Maffeo, and Marco later traveled to the Mongol Empire, where they met Kublai Khan and retrieved it, bringing the Codex with them to Venice.

"I long for home, these hot nights. I miss my family: my wife and my son, Marco."
―Niccolò about missing his family while on his journeys.[src]

Niccolò and his brother Maffeo were both born in Venice, circa 1230. Born and bred to be explorers, they left Venice for Constantinople in the Byzantine Empire in the 1250s, hoping to easily obtain money from the Latin occupation of the city. They established a trading post in the city, from where they began their commerce.[1]

They traveled between Constantinople and Florence over the following years, and Niccolò's son, Marco, was born in Venice in 1254. Despite this, the brothers quickly returned to Constantinople after Marco's birth, leaving Marco to grow up with his mother.[1]

In 1255, Niccolò and Maffeo met Darim Ibn-La'Ahad, a high-ranking member of the Levantine Assassins, and quickly befriended him. Eventually, their friendship resulted in Darim inviting the brothers to the Assassins' headquarters in Masyaf. In 1256, Niccolò and Maffeo sailed south to Acre, and proceeded onward to Masyaf some time later,[1] arriving there around the January of 1257.[2]

Training into the Assassin Order

"Increasingly I had come to realize that I was being told these stories for a purpose. That for some reason yet unfathomable to me, I had been chosen to hear them."
―Niccolò about his meetings with Altaïr.[src]

During their stay in Masyaf, Niccolò in turn told Altaïr's life story to Maffeo, who had at first grown a displeasure for the Assassins and Masyaf. Maffeo, moved by Altaïr's tragic life, became dedicated to the Assassins' cause, and Niccolò began to write a journal, detailing Altaïr's story and Niccolò's own conversations with Maffeo, which he would later title "The Secret Crusade".[2]

In August 1257, Masyaf was attacked by the Mongols, who had destroyed several of the Assassins' fortresses in the Levant the previous year, under the command of Hülegü Khan. Having spent a little over a month in training, Niccolò and Maffeo made preparations to leave Masyaf and were given several of Altaïr's books to take with them.[2][3]

Niccolò then met with Altaïr on Masyaf's castle wall, where he was handed Altaïr's personal Codex.[3] Additionally, the Polos were tasked with the future of the Assassin Order, as Altaïr had burdened them with the objective to establishing various Assassins Guilds around the world.[2]

Niccolò and Maffeo were personally escorted by Altaïr out of Masyaf, who used his "Apple of Eden" – an ancient artifact from the Isu – to fend off the attacking Mongols. Arriving at Masyaf's gate, Niccolò was finally given five Memory Seals, which Altaïr had turned into keys needed to open his personal library.[3]

"Ahead of us lay at least two years' work, which would be even more demanding without the wisdom of the Codex to guide us. Even so, we decided that, yes, we had lost the book, but in our heads and hearts we were Assassins, and we were going to put our freshly acquired experience and knowledge to good use."
―Niccolò mentioning their resolve to form an Assassins Guild in his journal.[src]

The Polos proceeded to make their way back to their home in Constantinople, though the brothers were attacked by a Mongol attacking party two days after leaving Masyaf. Niccolò and Maffeo, barely alive, saw the Mongols take the Codex from them, and they were left with the shame of losing the book.[2]

Arriving in Constantinople a few weeks later, Niccolò finished his journal on 1 January 1258, and he and Maffeo started the long process of establish an Assassins Guild soon afterwards. The guild attracted people from various places in the Byzantine Empire, including Greeks, Turks, Albanians, Jews, Genoese and Arabs.[1]

By 1259, the Assassins Guild was fully running, but the thought and shame of having lost the Codex was never far from Niccolò's and Maffeo's minds. The Polo brothers also hid the five Memory Seals given to them by Altaïr in several secret locations around Constantinople, and scattered his books around the various landmarks of the city.[3]

Journeys to the Mongol Empire

In 1259, the brothers left Constantinople for the Mongol Empire, aiming to retrieve the Codex from the Mongols. However, they were unsuccessful in obtaining the Codex after nearly a decade of traveling, and the Polos returned to Venice in 1269.[3]

Niccolò met his son Marco again when he was about 15 years old, and trained him to become an Assassin as well. With this, the two brothers began to establish an Assassins Guild in Venice, bringing the Order to their native homeland.[4]

Two years later, Niccolò and Maffeo took Marco with them on another journey through Asia in an attempt to once more retrieve the Codex from the Mongols.[3] Meeting Kublai Khan for the second time, Marco was able to obtain the Codex, and the Polos brought it back with them to Italy when they returned in 1294. Niccolò died later that same year, at the age of 64.[5]

Niccolò Polo was a man of great conviction, who was determined to finish his projects once he had started them, regardless of the efforts it would take him to do so. Through these traits, he was able to set up a trading post in Constantinople, as well as founding several Assassins Guilds with his brother.[2]

Niccolò was also a responsible man, who thought about the effects his actions had on others, and wished to fulfill the assignments others had entrusted to him. Due to this, the loss of Altaïr's Codex haunted him continually, until he and his family eventually managed to retrieve it from the Mongols.[3]

Altaïr escorting Niccolò and Maffeo out of Masyaf

Niccolò, Altaïr, and Darim looking at the Memory Seals 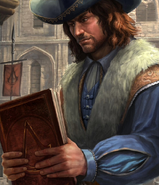 Niccolò with Altaïr's Codex in Masyaf