New York City is the most densely populated city in the United States of America. During the American Revolutionary War, New York was a stronghold of the British Army.

The Assassin Connor came to New York with Benjamin Tallmadge in 1776, to investigate a plot to murder George Washington. Tallmadge learned the Templar and Continental soldier Thomas Hickey was involved: Connor tracked Hickey by following members of his counterfeiting racket. Unfortunately, Connor was arrested along with Hickey by soldiers who mistook him for a fellow counterfeiter, and was thrown into Bridewell Prison. The Templars framed Connor for the plot and planned to have him executed outside City Hall, with Washington attending. The Assassins - and Connor's father, Grand Master Haytham Kenway[1] - stopped the hanging, and Connor assassinated Hickey for trying to kill Washington.[2]

Afterwards, the east side of the city was greatly damaged due to the Great Fire, and New York passed from American control to the British. In the meantime, Connor recruited Deborah Carter, Jacob Zenger and Jamie Colley to the Assassins after they helped him stop Templars taking advantage of these events. In 1778, Connor met with Haytham to find Benjamin Church, who had betrayed the Templar Order and the Continental Army, but discovered he had left New York for Martinique. Later, they worked together to find out British troop movements, learning the British planned to march on Monmouth.[2]

In 1781, the disgraced American general Charles Lee was living in Fort George. Connor planned to infiltrate the fort while the French Navy bombarded the fort, so he could find and assassinate Lee during the chaos. However, Connor found that Haytham had sent Lee away, and the Templar, no longer willing to reconcile with his son, attempted to kill him. Connor assassinated his father. A year later, Connor found Lee presiding over Haytham's funeral. Lee escaped, but by eavesdropping on an accomplice on the HMS Jersey, learned he had left for Boston.[2] A year later, after killing Lee, Connor watched the British depart on Evacuation Day, and met with Washington to discuss the country's future.[2]

In 2003, after having fled from the Farm, Desmond ended up living in New York City, working as a bartender at a successful nightclub named Bad Weather.[3] He would later revisit New York in 2012, specifically a Manhattan office, to recover a power source for the Grand Temple, though he came across opposition in the form of Daniel Cross.[2]

New York after the Great Fire 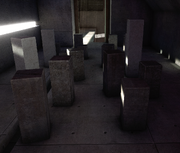 New York City's skyscrapers, as depicted in the Black Room

The Black Room version of a New York street

Concept art of New York after the great fire

Concept art of Connor standing in the New York Arcade

Connor on horseback in the North district

Fort George's courtyard
Add a photo to this gallery

Retrieved from "https://assassinscreed.fandom.com/wiki/New_York_City?oldid=576035"
Community content is available under CC-BY-SA unless otherwise noted.