Not to be confused with the Smith and Company Brewery.

The New York Brewery was a simulated location created and used by Abstergo Industries' entertainment branch in 2012, in order to influence the general public, as part of the console stage of the Animus technology.

At the center of this brewery, one out of the many breweries located in New York City, lay its courtyard, a wide open space with various goods and barrels of beer stacked on top of one another. Other points of interests included the tavern, which was adjoined by some stables, the boiling room, the fermentation room and a vast space used for storage.

With the implementation of new technology, simulated locations in the console stage were upgraded to have multiple aesthetic variations. Because of this, the New York Brewery could be utilized during the day, the night, or amidst a storm.

The Huntsman chasing after the Pioneer in the New York Brewery

The Bear, the Lady Maverick, the Huntsman and the Preacher assassinating their targets in a Wolfpack session. 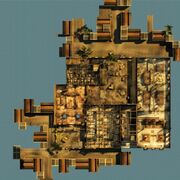 Retrieved from "https://assassinscreed.fandom.com/wiki/New_York_Brewery?oldid=791515"
Community content is available under CC-BY-SA unless otherwise noted.