Nergüi (1212 – 1279) was a member of the Mongolian Brotherhood of Assassins and the apprentice of Qulan Gal.

Nergüi was born to a horse breeder named Elbegdorj in 1212. Elbegdorj was drafted into the army of Genghis Khan's Mongol Empire, and was killed during the Battle of the Kalka River in 1223. This led the young Nergüi to harbor a grudge against the empire and the Khans, causing him to join the Assassin Brotherhood.[1]

In 1227, the Brotherhood prepared to assassinate Genghis Khan in order to halt the advance of his empire. Nergüi took it upon himself to scout the Khan's camp, but was captured and subsequently tortured, leaving his face permanently scarred. Nergüi was eventually rescued by Qulan and Altaïr Ibn-La'Ahad when the pair infiltrated the Great Khan's camp to kill him. Fleeing with an injured Altair after they were spotted by the mongols, the two veterans entered a yurt in which they found Nergüi. Qulan killed the guard and freed the disfigured novice and the three Assassins subsequently escaped the camp.[2]

Joining Maria and Darim on the heights above the camp, from where they were responsible for covering the two elders during their failed attempt to kill the Khan, the Assassins decided to make a new attempt. The group fired flaming arrows at the mongol camp to prompt Genghis to flee with Darim and Qulan going after him, killing the few guards who were with him, they ultimately killed the conqueror. Later, while the two mongols were parting ways with the Ibn-La'Ahads, Altair suggested that Qulan Gal took an apprentice and Qulan agreed to take the young mongol under his wing.[2]

Several years later, Genghis had been succeeded by his third son Ögedei. During this time, Qulan told Nergüi that he was soon ready to be inducted into the Brotherhood. Before this could happen however, Qulan instructed Nergüi to travel to Samarkand. Ögedei had sent an entire tumen to reinforce the city, and Nergüi was to assassinate their captain without being detected by the large force.[1]

After discreetly killing the captain, Nergüi returned to Qulan and informed him of his success. They then met with the Mentor of the Mongolian Assassins, who inducted Nergüi into the Brotherhood and gave him his own Hidden Blade.[1]

Bane of the Khans

In 1241, Qulan told Nergüi of Batu Khan, the founder of the Golden Horde who was tearing through Russia. In order to slow his advance, Nergüi was tasked with assassinating Ögedei Khan, while Qulan assassinated the Khan's brother, Chagatai. With no ready successor to the throne, Batu would be forced to return to Mongolia. The two both proved successful in their endeavors.[1]

In 1263, Nergüi went after the Russian prince Alexander Nevsky, a liaison to Hülegü Khan and a suspected Templar. After Nergüi confronted Nevsky, the two discussed the Mongol Empire. Nevsky justified his alliance with them by claiming that it was the only way to protect Kievan Rus'. Nergüi accused him of being a collaborator, and told him how the Assassins had played the Mongols against each other in the Toluid Civil War and the Berke–Hülegü war. After Nevsky realized Nergüi's intent to kill him, the two fought, and Nergüi proved victorious. They discussed their reasons for wanting the Khans eliminated. Nergüi told of his father, and Nevsky said that he had poisoned Batu out of vengeance for the poisoning of his own father. As Nevsky died, Nergüi expressed his respect for him.[1]

In 1265, Nergüi targeted Hülegü Khan himself, intending to avenge Hülegü's sacking of Masyaf and the destruction of the Levantine Assassins. Confronted by Nergüi, the Khan belittled him for his humble upbringing. Nergüi noted that the Assassins continued to fight the Mongol Empire, but Hülegü claimed that they were little challenge to him, having taken Masyaf with his Sword of Eden. Nergüi reminded him that he was only the Ilkhan, with Kublai Khan laying claim to the throne. Hülegü disregarded this, claiming to prefer action over politics. After making his intentions clear, Nergüi battled with Hülegü, and proved successful in killing him.[1]

Young Nergüi before his disfigurement 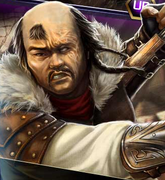 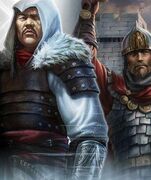