Nathan (1990s – 2016) was one of many individuals abducted by Abstergo Industries to have their genetic memories explored using the Animus. A descendant of Duncan Walpole, Nathan was imprisoned at the Abstergo Foundation Rehabilitation Center in Madrid where he became acquainted with fellow inmates Moussa, Lin and Emir, with whom he formed an unofficial cell of Assassins.

Hailing from the East End of London, Nathan was a troubled teenager that often picked fights with others, leading him to be expelled from multiple schools. He subsequently fell in with a gang for whom he peddled drugs; because of his youthful appearance, he was frequently sent to sell drugs near schools. One day, Nathan's temper got the better of him, causing him to beat a fellow gang member within an inch of his life.[1]

At some point, Nathan was kidnapped by the Templars and brought to the Abstergo Industries facility in Madrid, where he had to relive the life of his Assassin ancestor, Duncan Walpole. Experiencing Walpole's memories was very traumatic for Nathan, as he suffered extensively from the Bleeding Effect and feared his ancestor's personality would seep into his own. By 2016, Nathan had become part of Moussa, Lin and Emir's group; the four saw themselves as the protectors of the Apple of Eden.[1]

In October, the arrival of Callum Lynch, actually the son of Assassins Joseph and Mary Lynch, immediately got the attention of Nathan and his friends. Out of his group, Nathan was the most distrustful, paranoid that the man would betray them to the Templars somehow and lead them to the Apple. At one point, he openly assaulted Callum, trying to strangle him with a garrote; however, Callum resisted long enough to allow guards to interfere.[2]

For the attack, Nathan was locked into his cell room. During Callum's last session in the Animus, where he would discover the location of the Aguilar's Apple of Eden acquired by his ancestor Aguilar de Nerha, Moussa's group launched a prison break, with Nathan being set free once Emir had gotten control of the security room. He subsequently joined the others at the Animus Chamber, where they found Callum being inducted into the Assassin Brotherhood through a projection of his mother, thus putting Nathan's suspicions to rest.[2]

Preparing to defend themselves against dozens of Abstergo guards that would soon breach the locked door, the Assassins equipped themselves with the various antique weapons adorning the room. Thanks to the Bleeding Effect, Nathan was able to wield a sword and Hidden Blade in tandem with deadly effect, incapacitating several attackers. However, in a moment of arrogance brought on by Walpole, he failed to notice a guard that snuck up on him, causing him to be stabbed fatally in the back.[2]

Nathan is a character in the film Assassin's Creed, where he is portrayed by the actor Callum Turner. 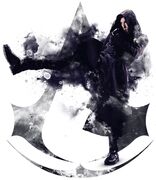