Natakas (died c. 423 BCE) was the son of Darius, the assassin of King Xerxes I of Persia. He was also the brother of a number of siblings, including Neema. Through his relationship with Kassandra, he became the father of Elpidios and an ancestor of Amunet, the co-founder of the Hidden Ones.

From Persia to Makedonia

After his father's failed assassination of King Artaxerxes I of Persia, Natakas and his family were targeted by the Order of the Ancients, and the family had to flee the country. Over time, Natakas' mother and his siblings perished, but Natakas and Darius survived and eventually sought shelter in Chalkidike in Makedonia, Greece, successfully losing their pursuers. In time, Natakas created a small memorial for his family outside the shelter.[1]

In 429 BCE, led by the Huntsman, the Order of Hunters branch of the Order of the Ancients came to Greece in search of the Tainted One, the eagle bearing Spartan misthios Kassandra. Unaware of Natakas and Darius, the Order joined forces with the Spartan army in the area and targeted the village of Potidaia in Makedonia in order to lure out the Eagle Bearer.[1] Seeing the village in trouble, Natakas sought to help, and met Kassandra, saving her from a sneak attack by one of the soldiers sent by the Order. Later on, Natakas fled from the village on Kassandra's orders as she fought against the Order Elite and his guards. After Kassandra dispatched the guards, Natakas met her at the village outskirts, and they worked together to save the remaining villagers from the soldiers hired by the Order.[2]

Sometime later, Natakas interrupted a fight between Kassandra and his father, the latter believing that Kassandra had been sent by the Order. Natakas introduced Kassandra as the Eagle Bearer that the Order was looking for, leading Darius to withdraw his sword and Hidden Blade. As they retreated back to their shelter, Natakas told Kassandra to look for them so that her questions could be answered.[3]

From Makedonia to Achaia

After Makedonia, Natakas and Darius sought to leave Greece. In 424 BCE, they were in Achaia, looking to charter a passage aboard a ship. They soon learned that Achaia had been blockaded by another branch of the Order of the Ancients, working along with the Spartan forces in the region. While he was supposed to see about a ship, Natakas' eagerness to help refugees targeted by the leader of the Order of the Storm, the Tempest, forced him to hide. Worried, Darius joined forces with Kassandra anew, and they helped Natakas and the refugees at Teichos of Herakles.[5]

Following their escape from the Teichos, Natakas argued with Darius, and the latter eventually acquiesced to help deal with the Order again. With Kassandra's help, Natakas and Darius were successful in this, as well. Along the way, Natakas developed feelings for Kassandra.[6]

Though their plan had been to sail out of Greece together with the refugees, Natakas and Darius changed their minds, and settled with Kassandra at the Ionian Watch on a cliff looming over the village of Dyme. In time, Natakas conceived a son, Elpidios, with Kassandra, and they enjoyed the peaceful, quiet life near the shore.[7]

Natakas loved the life at Ionian Watch, playing hide-and-seek with his son and his father. Unbeknownst to them, however, Amorges, the head of the Order of the Ancients, had set his eyes on them.[8]

One night, around 423 BCE, Amorges stormed Dyme, setting fire to the village, his men killing the residents. Natakas fled with Elpidios to the beach nearby, and hid within the hull of the ship there while Darius and Kassandra fought the Order of Dominion's forces.[9] While they were busy dealing with The Immortals, elite members of the Order, Gergis the Herald, another Magus, found Natakas and Elpidios. While Natakas fought and slew a number of Gergis' men, he was eventually killed as well, and Elpidios taken.[10]

Natakas' death was a hard blow for both Darius and Kassandra, and grief-struck, they parted ways after raising a memorial to him on the yard of their home. Seeking revenge, they both eventually tracked the Order of Dominion and Amorges down to Messenia, and did all they could to retrieve Elpidios and avenge Natakas, eliminating the Order as well as they could.[11]

After defeating the Order, Kassandra returned to Natakas' memorial, recovering mementoes of him before finally saying goodbye, and keeping his bow.[12]

In Assassin's Creed: Odyssey's DLC Legacy of the First Blade, Natakas is replaced by his sister Neema if the Eagle Bearer is Alexios instead of Kassandra. 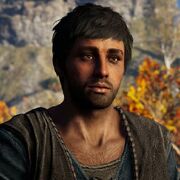 Darius and Natakas talking at their hideout

Darius and Natakas at ease at the Ionian Watch

Natakas' memorial outside their home

Natakas as he appears in Assassin's Creed: Rebellion