Nadya Nikolaevna Orelov (born between 1908 and 1917) was the daughter of Nikolai and Anna Orelov.[1] She is also the elder sister of Innokenti Orelov, and as such, a great-aunt to Daniel Cross.[2]

In 1917, Nadya was present with her parents when Nikolai exhumed the body of Grigori Rasputin, in order to obtain his shard of the Russian Imperial Sceptre, one of the Staves of Eden. They then proceeded to escape Russia, and migrate to the United States to begin new lives.[1]

During the Palmer Raids of 1919, Nadya and her mother were separated from her father and younger brother, and were deported back to Russia. The American Assassins later claimed that they had overseen Nadya and Anna's safe return to Russia, saying that "the Brotherhood takes care of its own."

Nadya married and had at least one child, a son. Many years later, in 2002, she met a young man in a church in Moscow, not realizing that it was her great-nephew Daniel Cross.[2] Without knowing it, she also possessed Rasputin's shard of the Imperial Sceptre, which had splintered from its parent Staff when the artifact was destroyed in the Tunguska explosion by her father.[2] 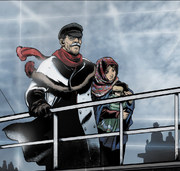 Anna carrying Nadya as they travel to the United States

Nadya meeting her grand-nephew
Add a photo to this gallery

Retrieved from "https://assassinscreed.fandom.com/wiki/Nadya_Orelov?oldid=890405"
Community content is available under CC-BY-SA unless otherwise noted.