Mydon was an elder priest of Asklepios working at the Sanctuary of Asklepios in Argolis, Greece during the 5th century BCE.

At some point during the 440s BCE, Mydon received a distraught and dirty Spartan woman named Myrrine and her badly injured baby.[1] He attempted to help the child, but the baby was beyond the skills of the priests at the Sanctuary.[2]

Eventually, he told the woman the news. The woman cried, held the baby in her arms, sang to him and then left him to the gods, leaving the Sanctuary. After a while, the priests attempted to return the baby's blanket to the woman, but she refused it.[3]

Sometime afterwards, the priestess Chrysis forced Mydon to cut out his tongue, so as not to further talk about the woman and her visit to the Sanctuary, about that particular baby.[2] He still continued working as a healer, withdrawing into the guesthouse of the Sanctuary where servants 'tended' to him.[1]

During the Peloponnesian War, Mydon was visited by the misthios Kassandra who came seeking information for the whereabouts of Myrrine, who was her mother. As Mydon was unable to speak, his servant helped him to answer Kassandra's questions and relay whatever information she needed.[2] 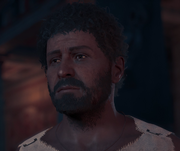 Mydon with a devasted Myrrine
Add a photo to this gallery

Retrieved from "https://assassinscreed.fandom.com/wiki/Mydon?oldid=829616"
Community content is available under CC-BY-SA unless otherwise noted.