Monteriggioni is a town and commune of Tuscany, Italy. Built in the year 1213 by the overlords of Siena, Monteriggioni was actively involved in the defense of Tuscany against Florentine attempts to gain more territory.

At the front of this conflict was the Auditore family, who later became the town's rulers and protectors. They constructed Monteriggioni's famous walls, and the largest structure within them, the Villa Auditore.

Monteriggioni also served as the headquarters of the Italian Brotherhood of Assassins from the early 14th century, when Domenico Auditore renovated the villa, to the year 1500, when the town was besieged by Cesare Borgia.

In 1290, the Villa Auditore was constructed, though the identity of the one who built it is unknown. Thirty years later, in 1320, the exterior of the villa was damaged in a Florentine attack.[1]

Some time after the death of Dante Alighieri in 1321, Domenico Auditore bought and renovated the villa using funds he had gained from Marco Polo. Subsequently, Domenico and his son used Monteriggioni as a base of operations in their silent war against the Templars.[1]

During the villa's restoration, Domenico changed its exterior and added a painting gallery. He also hid the armor of Altaïr Ibn-La'Ahad in the Sanctuary underneath the villa, which could only be unlocked by Assassin Seals hidden in sarcophagi of famous historical Assassins.[1]

In 1296, what would become the Auditore Family Crypt was built in the town. Domenico's memoirs, which told of how he had arrived in Florence and had taken the name "Auditore", would later be inscribed upon the crypt's walls.[1]

"Monteriggioni has long stood against her attackers by tucking in and outlasting. The Fiorentini may strike at any time, but they will find us prepared!"
―Mario Auditore, regarding the defense of Monteriggioni.[src]

At some point in mid 14th century, the Italian Assassins stole the Shroud of Eden from the French Templar Geoffroy de Charny and brought it to Monteriggioni.[2] Upon confirming the Shroud's validity, Renato Auditore decided that the Shroud needed to be hidden.[3] After concealing the artifact with claims of fraud and falsified church records, the city well was drained and excavated further in order to store the Shroud.[2]

In 1454, Mario Auditore was made sole ruler of Monteriggioni when his brother Giovanni moved to Florence.[1] The town came under frequent attack by Florence during this time, leading Mario to strengthen the town's economy and defenses in order to better withstand Florentine pressures.

Soon after, Mario discovered that a man named Luciano Pezzati was causing strife within the town, by turning families against each other. After he was captured and interrogated, Luciano revealed that Florence was planning a large attack on Monteriggioni. Mario rallied his forces and successfully repelled the Florentine forces led by Federico da Montefeltro.

After defending the town, Mario continued to interrogate Luciano, only to discover that the purpose of the Florentine attack was to acquire an ancient artifact hidden underneath the town. With the help of several architects and historians, Mario eventually discovered the Shroud in the hollowed-out well of the town, and had it removed from Monteriggioni by Giovanni.[3]

Over the next twenty years, Monteriggioni gradually fell into disrepair as Mario devoted more of his time to war and the Brotherhood. By 1476, most of the town's shops had closed, the number of visitors to Monteriggioni had decreased, and the upkeep of the Villa Auditore had been neglected.[1]

On New Year's Eve 1476, Mario's nephew, Ezio Auditore da Firenze, took shelter in Monteriggioni, and later became the town's biggest investor and co-ruler with Mario. For over twenty-three years, Monteriggioni prospered as Ezio used the funds he had gathered during his adventures to reopen the town's shops, barracks, the Felina brothel[4] and thieves' guild. The town's church, well, and mines were also reopened.

Significant improvements were also made to the town's infrastructure, and the Villa Auditore was gradually renovated. By December 1499, Monteriggioni had become a vital headquarters of the Assassins, whose flag flew over the town.[1] Around this time, Mario also added cannons to the town's defenses.

On 2 January 1500, Cesare Borgia – Captain-General of the Papal Army – led a siege on Monteriggioni in order to recover the Apple of Eden that Ezio had taken from the Templars. Though the Assassins were able to temporarily hold off the attack while the citizens were evacuated, the town eventually fell; resulting in Mario being killed, and the buildings of Monteriggioni suffering significant damage.[5]

Following this, the Assassins abandoned the town, relocating their headquarters to Rome, although one Assassin, Lo Sparviero, stayed on Monteriggioni, protecting the citizens and guarding the town's secret vaults. [6]

One day in around 1502, Pietro de Galencia, a Templar spy under the guise of a doctor for a few years, learned a secret path to the vault from an injured old man, who been imprisoned and tortured by Pietro. He employed three mercenaries disguised as tax collectors to harass the residents, and bribery of the Captain of the guards to protected the mercenaries.[6] At the times that Lo Sparviero acted to defend the citizens,[7] Pietro successfully made his way to the vault and stolen a chest that fill the blueprint of Hidden Blade. When Lo Sparviero returned to the Sanctuary, he revealed someone stolen Mario's chest and act to search.[6]

After two days, the old man managed escape from the cellar and alert the citizens to Pietro's treachery just before the Templar had planned to depart from the town. Forced to think fast, Pietro summoned his henchman to the front of the church.[8] However, Lo Sparviero used Eagle Vision located on him. When Pietro saw the Assassin, he fled away to the back yard of Villa where the guards with him. Even so, the Assassin made his way to killed Pietro.[9] Unfortunately, the chest was no longer in Pietro's possession. The Assassin sprinted to Pietro's house but all that he was able to find in a hidden compartment in the wall was a stack of letters. Through the letters, the Assassin learned that Pietro was an agent sent by Cesare Borgia.[8]

At some later point, an elderly Ezio returned to Monteriggioni and entered the Sanctuary underneath the Villa Auditore. There, Ezio left a clue for the password of the Colosseum Vault, which would eventually be found by his descendant, Desmond Miles.[5]

Prior to 1554, the Auditore family regained control of Monteriggioni, though the town was betrayed in 1554 by Giovannino Zeti, the keeper of the garrison and a Florentine exile, who was allowed to return to Florence in exchange for the keys to the city. Though the town was soon conquered by the Medici family of Florence, the Auditore were allowed to continue their leadership over Monteriggioni, due to their good relations with the Medici.[1][5][10]

Desmond: "I figured you'd like it nowadays. Seems not to have changed much."
Shaun: "Exactly. History is the study of change. Change is life. When things become static, it means they're dead."
—Desmond and Shaun discussing modern Monteriggioni.[src]

By the 21st century, the town remained largely unchanged from its Renaissance appearance, and had become a tourist attraction, with a plaque in front of the ruined Villa Auditore commemorating the siege of the town by the Borgia.

On 9 September 2012, a small team of modern-day Assassins, composed of Desmond Miles, Lucy Stillman, Shaun Hastings and Rebecca Crane, arrived in the town of Monteriggioni to seek refuge from the Templars of Abstergo Industries. They set up a temporary hideout in the Sanctuary beneath the Villa Auditore, where the cell signals that Abstergo was using to locate them could not reach.

The group remained there for the next month as Desmond used the Animus to determine the location of Ezio's Apple of Eden, venturing above ground only at night or when supplies were needed. Also, while Desmond explored Monteriggioni at night during his breaks from the Animus, he managed to recover some of his ancestors' possessions. After discovering the Apple's location, and the password to the door of the Colosseum Vault, the team left the town for Rome on 10 October 2012, 72 days from the launch of Abstergo's satellite.

As well as this, Abstergo used Monteriggioni as a simulated location in the first stage of training for the recruits in their Animi Training Program.[5]

Upon his arrival in Monteriggioni, Ezio was able to invest in the renovation of various buildings throughout the town, with the help of an architect hired by Mario. As the town was renovated, the appearance of the Villa also improved, and flags (marked first with Auditore crest, and then with the Assassin insignia) were also added to buildings.[1] 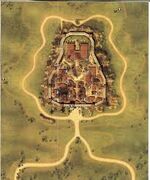 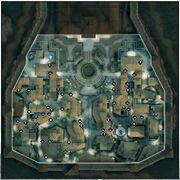 A map of Monteriggioni in the Animi Training Program

An architect's model of Monteriggioni

Concept art of Monteriggioni and its surroundings

Concept of the brothel in Monteriggioni

Concept art of the fall of Monteriggioni

Concept art of Monteriggioni during the siege

The countryside just outside Monteriggioni

The streets of Monteriggioni

Monteriggioni with the Villa at the center

Panoramic view of the Monteriggioni outlands 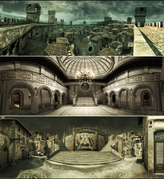 Database image of the Felina Quarters in Assassin's Creed: Identity

Database image of the Monteriggioni in Assassin's Creed: Identity

Concept Art of Monteriggioni Tower
Add a photo to this gallery

Retrieved from "https://assassinscreed.fandom.com/wiki/Monteriggioni?oldid=935798"
Community content is available under CC-BY-SA unless otherwise noted.