In 2012, it was used as a simulated training location by Abstergo Industries during the first and second stage of their Animi Training Program. During the first stage, it was included after a system update, and was later merged alongside the virtual rendition of Pienza in a subsequent addition.[1]

The simulation depicted Mont Saint-Michel as a community built tightly together, enclosed by the town's ramparts. Reflecting the feudal ideal, the church and abbey were built on the island's highest point, with stores and housing located lower. With its many different levels of elevations, as well as narrow streets and hidden pathways, Mont Saint-Michel was a place that allowed one to slip away without a trace.[1]

Mont Saint-Michel, like most of the simulated locations in the first and second stage, had two aesthetic variations. As such, it could be utilized during the day or the night.[1]

Illustration of Mont Saint-Michel's cathedral, created by Yannick Corboz
Add a photo to this gallery

The streets of Mont Saint-Michel at night 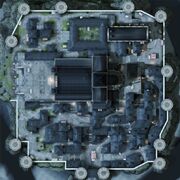 An aerial view of Mont Saint-Michel

Two Hellequins fleeing from their pursuers

A pair of Captains about to be assassinated by Officers

Retrieved from "https://assassinscreed.fandom.com/wiki/Mont_Saint-Michel?oldid=832443"
Community content is available under CC-BY-SA unless otherwise noted.