"It's the diamond, Mon. They want the Koh-i-Noor [...] Your ancestors hid the real one some time in the eighteen-hundreds and I guess they didn't tell anybody where. The only clue to finding it is apparently in your DNA."
―Jot regarding Monima's ancestry, 2013.[src]

Monima Das (died 2013) was an Indian actress and the fiancée of MysoreTech programmer Jot Soora. Her ancestors included the Assassin Arbaaz Mir and princess Pyara Kaur, the granddaughter of Maharaja Ranjit Singh.

In late 2013, Monima's rich ancestry would unwittingly turn her into a target for the Assassins and Templars, as both groups were hoping to locate the Koh-i-Noor diamond through her genetic memories.

Born into a privileged and wealthy family, Monima constantly travelled the world during her youth due to her parents' roles as university professors, until she was sent to a large boarding school in Mumbai.[1] She ended up going into acting and became an increasingly popular film starlet. At some point, Monima also entered into a relationship with computer engineer Jot Soora, to whom she eventually became engaged.[2]

In October 2013, her fiancé began working on the Brahman V.R., a device that MysoreTech had been assigned to distribute by Abstergo Industries, and brought it home with him one day. Despite Jot's excitement at his discovery that the machine allowed the user to relive the memories of one's ancestors, Monima was largely disinterested, jokingly referring to it as a "karaoke machine". Still, her curiosity tempted her to try it out later, while her fiancé slept, leading her to relive the meeting and tryst between the Assassin Arbaaz Mir and Punjabi princess Pyara Kaur.[2]

However, the experience was later cut short by Jot, who had shut the computer monitoring the Brahman, leaving Monima confused and frustrated. The intense attraction she had sensed between Pyara and Arbaaz made her second-guess her feelings towards her fiancé, who himself was rattled by the revelation that Monima was descended from royalty; his own ancestor, Raza Soora, was but a mere servant by comparison. Despite her reassurances that nothing had changed, the relationship between the two grew strained, in part due to Jot's jealousy over Monima's interactions with his boss Ajay Rana.[2]

Irked by her fiancé's distant attitude, Monima decided to focus on her film career instead. While en route to the airport, she held a frosty discussion with Jot regarding an advertising job offered to her by Ajay. Monima subsequently handed her fiancé her engagement ring, feeling she needed to continue keeping their relationship a secret from the paparazzi, and then departed for a film studio in Mumbai.[2]

Sometime after, Monima received a phone call from Jot, who, affected by his experience with the Brahman, expressed his desire to see her, to which she reluctantly agreed. However, she neglected to notify the security guards of his arrival, forcing Jot to try to get her attention from within a crowd of fans. Monima did manage to glimpse her fiancé briefly, before he was forced into a white van and disappeared.[2]

Although she continued filming that day, Monima frequently attempted to contact Jot, but none of her calls ended up making it through. When her wounded fiancé appeared at the studio later that evening, she immediately called a stop to the shoot and rushed to his side. After his injuries had been tended to, Jot explained to Monima that she was a target for people attempting to obtain the Koh-i-Noor, because she was a descendant of its last known owner. Monima decided they needed to go to the police, but before they could do so, they were abducted by Templar agents.[2]

Forced into a black van, Monima and Jot were being driven down the highway at great speed, when they suddenly heard a loud thump on the roof; a rescue attempt by Assassin Jasdip Dhami. While the couple braced inside the vehicle, a fight ensued between the Assassin and the Templars' escorts, with the latter being quickly taken out. The resulting chaos caused the driver to lose control of the van and crash through the highway's safety barrier.[2]

The vehicle sank into the Mithi River with Monima and Jot still trapped inside. Jasdip came to their rescue, but could only free Jot, leaving Monima to drown in the depths of the Bay of Mumbai. Her genetic memories were preserved through the Brahman device she had used, and were later transferred into Jot's phone.[2]

In August 2014, Melanie Lemay had come to an arrangement with Ajay to create a digital version of Monima using Animus technology, which would then be used to complete production of Dvija A.I, Monima's last film, and "give [her] the send-off she deserved".[3] 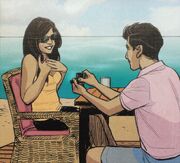 Monima dressed as a character for Dvija A.I.

Jot and Monima kidnapped by Templars

Jot and Monima about to drown